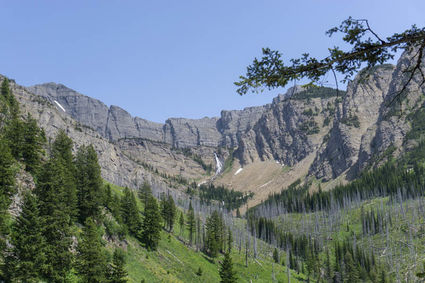 Holland Peak (left) and the waterfall from Upper Rumble Lake can be seen from the trail after the first major uphill.

Distance: Five miles to the peak

Disclaimer: This trail is not a US Forest Service trail and some sections of the trail can change or become hazardous.

Holland Peak is truly a must hike for the hiker who wants to challenge themselves or bag an impressive peak. Holland is the tallest in the Swan Front, and offers incredible views throughout the hike. It is not an easy hike to accomplish and it is important to be prepared both physically and with supplies.

The trail starts off in a grassy field just under the base of the Swan-Front. The first section takes hikers up a mild uphill climb through heavily forested areas, and then dumps onto the East Holland Connector trail, which runs all the way to Holland Lake, roughly seven miles south.

To get to Holland Peak, however, there is an unmarked left turn on the connector, which is located just after a series of bridges over a small creek. Once on the trail, the path shoots up the face of the Swan Front.

Most of the trail is very steep. Once on the trail to the peak, hikers ascend over 3,000 feet in just over a mile. Parts of the trail are exposed to the sun and other climbs are just straight exhausting, so it is important to bring plenty of food and water for the occasional breaks.

The first climb ends with crossing a ridgeline and entering the Rumble Creek area. Here beautiful flowers and wildlife can be spotted. In just a couple more feet of incline, the hiker reaches lower Rumble Lake.

On my hike, I decided to stay at the lower lake for the night instead of doing the whole climb in a day. While backpacking is doable and there are some scenic campsites, most hikers on the trail opt to do the whole hike in one day. The trail is lightly trafficked all the way through, but there will be the occasional hiker or ultra-runner sharing the climb as well.

From lower Rumble Lake, the trail hugs the right side of the bowl. Most of the path rests on shale rockslides, which makes the trail less visible due to the constant movement of rock. Most of the trail is easy to follow and hikers can climb as they watch Rumble Falls spew water down hundreds of feet while climbing.

Once hikers scramble up the loose rock of the wall to upper Rumble Lake, then the final ascent begins. The trail starts facing south, builds elevation and then wraps around the ridgeline before finally summiting the peak. There is no official trail, in fact there are multiple trails one can take but they are all near one another.

The summit trail starts with switchbacks up the ridgeline, eyeing towards a nearby peak on the front. Hikers have to first summit this section of trail, located just under 9,000 feet, before venturing across a saddle to Holland.

The ridgeline is steep, skinny and rocky. Below the half visible trail rests Upper Rumble to the west, and the expansive Bob Marshall Wilderness to the east. Some light climbing and bouldering is necessary to climb past certain obstacles.

When the trail passes the ridgeline, the final climb appears and the trail transcends from a clear gravel path to multiple areas where past hikers free climbed the side. There could be some lingering snow patches depending on when one goes, but they were mostly gone by late July. 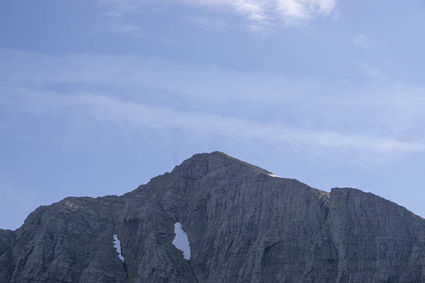 The scramble to the top ends with a small stone structure, some mementos past hikers left on their climbs and a view that encompasses the Mission Mountains, the Bob Marshall and the southern tip of Glacier National Park.

Some rain can make the peak quite treacherous, as when I observed the storm which electrified the high mountain air and almost electrocuted my hiking partner. In the case of inclement weather or lighting threat, one should find cover, keep low and make sure to stay away from metal gear.

The hike down to Rumble Lakes is the most difficult section because of the steep decline and loose rock. Once past the Rumble Lakes, the trail is smooth sailing all the way back to the trailhead.

This area is common to many animals, including bears. Make sure to bring bear spray.