Morrell Lookout and Beyond

Up, On and Over 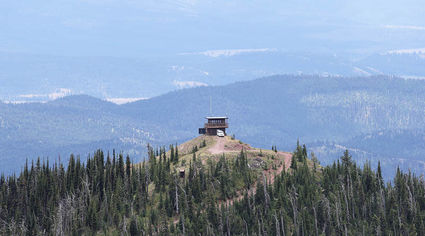 Morrell Lookout sits at 7,700 feet atop Morrell Mountain overlooking Seeley Lake. It is staffed every summer from early July through mid-October, depending on the fire season. It is open to the public when it is staffed.

SEELEY LAKE - On a Tuesday afternoon, June 6, I set out for my first real adventure since moving to Seeley Lake. After a few weeks of running around town with the Morrell Mountain looming as a backdrop, I decided I needed to see the view from the top.

I wanted to make it an all day activity, so I grabbed a bike and headed off towards the mountain. From Seeley Lake, it was a fairly easy eight-mile ride to Morrell Mountain road. Although I haven't been on a bike in a few months, I got to the base of the mountain with relative ease. Then I started to go up.

And up and up and up. The road winds back and forth across the western side of the mountain, so there was a nice view as I rose above Cottonwood Lakes.

My only trouble came when I remembered some advice I'd gotten from my editor (THANKS ANDI) to look for the avalanche chute and cut straight up from there, which saves approximately two miles and a solid half hour... if you pick the right spot.

To my naïve and adventurous mind, everything started looking like an avalanche chute. I had a map with me so I knew that cutting up the mountain would eventually dump me out onto another switchback. Eventually I picked a random part, put my bike over my shoulder and started hiking.

I spent about 30 minutes being eaten alive by mosquitoes before I finally trudged far enough through the woods and up the hill to the next switchback. I can't iterate enough how relieved I was to see a flat, cleared section of hillside.

Unfortunately my joy was short-lived due to lingering snow on the road. I ditched the bike behind a tree and hiked straight up the mountain again. Thankfully this route was much easier to divine- go to the fire tower.

The Forest Service manages it as an active lookout from late June through late August. When I visited it was yet umanned. The view from the top was spectacular- Seeley Lake sparkled in the late afternoon sun.

My real goal wasn't the lookout, but Morrell Peak, a hop, skip and ridgeline away. I took off across the snow following the ridgeline. The first feature I found was the lookout outhouse.

For anyone brave enough to use it without shutting the door, you can get a magnificent view of the Mission Mountains while doing your business.

It only took about twenty minutes of hiking and glissading across the snowfields to reach the peak. I built myself a mini summer snowman and relaxed for a bit to enjoy the view.

On my return trip, I chose to keep my bike on the road all the way back which made for a relaxing return journey, other than a hand cramp from riding the brakes so much.

All together I spent about six hours biking, hiking and glissading to the peak-but it can be done much quicker by driving most of the way to the lookout. 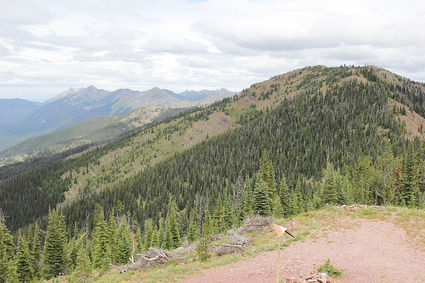 Morrell Peak as seen from the catwalk of the lookout. It rises to 8,174 feet. There is a trail to the top of the peak from the saddle where vehicles typically park.

Overview: The walk from the parking area to the lookout itself is about 0.5 mile.

To reach the peak, descend back to the last switchback on the road. A faint trail leads you up the ridge to the first high point, about a half-mile. From there, turn to the east and follow the obvious ridgeline to the next high point another third of a mile away.

There may or may not be a faint trail that leads from the first high point to the actual peak, but when I did it there was still enough snow that I didn't touch dirt until the true summit.

With an elevation of just over 8,000 feet, the upper road and ridgelines can be covered with snow until July.

The lookout was built in 1921. It was replaced in 1962 with the current 15 x 15 foot flattop with a catwalk that can be accessed when the tower is manned. The lookout is listed on the National Historic Lookout Register.