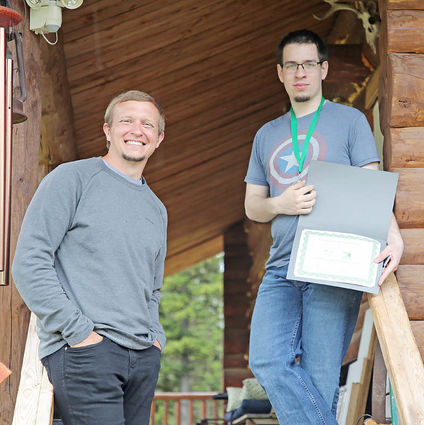 SSHS Principal Kellen Palmer presents Levi Reinitz their medal and certificate at their homes May 18.

SEELEY LAKE – The Missoula Education Foundation and Missoula County Public Schools recognized senior Levi Reinitz and sophomore Crystal Lopez as a Most Inspiring Student at Seeley-Swan High School. SSHS Principal Kellen Palmer presented the awards at their home May 18. The award recognized the students' achievements and commitment to their education.

Reinitz was a library aide for the past two years. He worked to ensure the student program would continue and created a job description and binder for future library aides.

"His energy and love of reading are contagious and so very appreciated," wrote a SSHS staff member. "He will be missed and very hard to replace!"

As a senior, Reinitz became a leader in the classroom and on the cross country team. Staff said that he brings original, insightful ideas to class discussions. He has no time for self-consciousness or pessimism listing others with kind words and encouragement. On the cross country team, he was always ready to lend his teammates and coach a hand.

"Levi thinks for himself and lives according to a strong set of personal ethics," wrote a SSHS staff member.

Another added, "He is thoughtful in his speech and actions, always choosing his course with the intention of being clear and doing no harm.  He has learned to advocate for himself and understands his part in taking responsibility for his learning.  His smile and his constant wishes that you "have a good day" make every day a brighter one."

In her two years at SSHS, the staff said Lopez has stepped up in her academics as well as a leader in the school. Her work on the student council has helped create pride throughout the school and has set a better course of action.

"Crystal is always going to be upfront with you," wrote SSHS staff. "She will listen intently and form decisions on what is best for her and her fellow students." 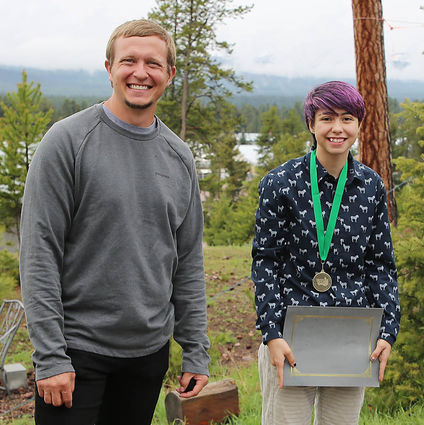 SSHS Principal Kellen Palmer presents Crystal Lopez their medal and certificate at their homes May 18.

"She says what she thinks in such a genuine, insightful, bold manner that it often causes others to re-examine what they previously thought to be true – or maybe what they thought in their gut was true but had no idea how to articulate," wrote SSHS staff. "She is a poet and a vivid, deeply thoughtful person who is so worth knowing."

Lopez appreciated the recognition acknowledging her student role models 2019 SSHS graduates Autumn Morse and Ashley Miller. Lopez said Morse was an incredible role model and she really looks up to her and Miller was also inspiring and a great student.

"I'm always trying to replicate the good I see in the world and I just want to pay tribute to the students that inspired me from last year," said Lopez. "I had really inspiring role models and I just wanted to take on that role for other kids."