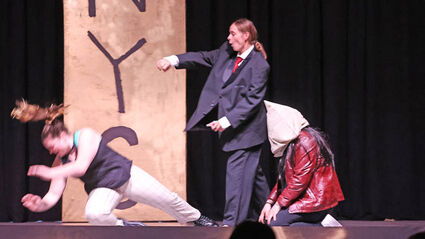 Despite Yasha's (left - Beth Homen) best efforts, Mafia Boss Alias (MacKenzy Best) took her down and killed her. Yasha's sister MJ (with the hood over her head, Sky Burckhard) wanted to kill Yasha to avenge their parents' death, something she blamed on Yasha. Instead MJ killed Josiah who arrived to help Yasha.

SEELEY LAKE – The Seeley-Swan High School Drama Class wrapped up the semester with the premier production of "Catch Me As I Fall" May 25. SSHS Senior Beth Homen wrote, helped produce and played the main character Yasha in this modern-day play set in New York City.

The title of the play "Catch Me As I Fall" was important to Homen. She felt it captured the story of Yasha.

Yasha, a 25-year-old English professor, escaped from the mafia at age 17. When she escaped she left her younger sister MJ and best friend Alias behind. She devoted her life to help others escape the mafia.