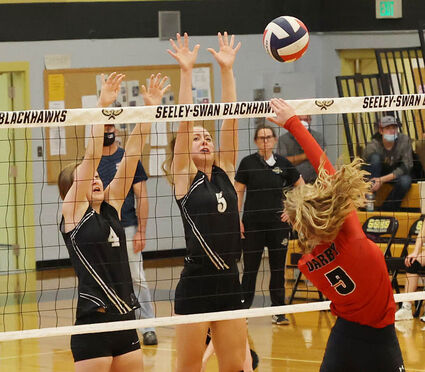 Junior Cora Stone and Senior Sariah Maughan block a shot from a Tiger. The pair had 3 blocks each in the match.

The Seeley-Swan Lady Blackhawks had a victorious week defeating the Darby Tigers at home before cleaning house at a tournament in Arlee.

Sariah Maughan pounded in 10 kills followed by Cora Stone with 5. Trista Alexander served up a season best 6 aces while Trista Wendel and Maughan each had 5. Alexander and Ava Thornsberry led in setting with 25 and 21 assists respectively.

On the defense, Maughan and Stone each had 3 blocks and Dani Sexton had 13 digs.