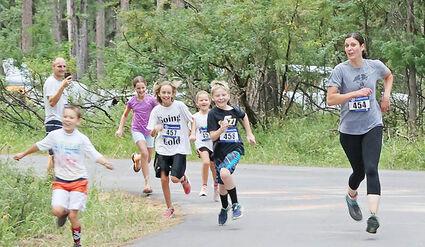 The Marshall and Olsen children of Great Falls running with Jamie Marshall as she approached the finish line in the women's long swim. Carter Marshall, 9 (front left) said he was excited and scared before the kid's triathlon. Afterwards, Macey Marshall, 7, proclaimed, "It was awesome!"

SEELEY LAKE – The smoke cleared for the annual Youth for Christ (YFC) Duathlon/Triathlon Saturday, Aug. 7. Nearly 60 racers swam, biked and ran in and around River Point Campground. In its 15th year, race organizers are excited to continue to grow the field back to pre-COVID levels by continuing to encourage young triathletes and families to participate.

Seeley-Swan High School student Holly Friede started the triathlon in 2006 under the mentorship of Cheri Thompson, current race coordinator. It originally raised funds for Families with Spinal Muscular Atrophy (SMA). Now it is one of YFC's big fundraisers that promote programming and events for the YFC and the City Life Center. Funds raised goes directly towards relationship building with youth at YFC.

Shawn Bubb of Helena participated in the first triathlon in 2006.

"It was a really cool event and it has really evolved over time," Bubb said.

Bubb has completed the triathlon more than 10 of the 15 years. He said with Cheri's longevity with the event, every year they incorporate something different that makes it a little smoother and better for a wide range, especially for the younger triathletes.

"It is kind of growing the sport so that has been really fun to watch," Bubb said.

Bubb's competes in other triathlons across the state including Whitefish, Helena and Great Falls. There are several reasons why he returns to Seeley's every year.

"The bike course is wonderful. I absolutely love how warm the lake is. It is like swimming in bath water," Bubb said. "Seeley Lake is always a friendly place to come."

Great Falls couple Jamie and Robert Marshall participated in the triathlon for the first time in 2018. Their three children Maren, 11, Carter, 9, and Macey, 7, all wanted to do it some day. They returned this year because it was on Carter's summer bucket list.

"We decided to do it as a family," Jamie said.

If there were a prize for the best cheering squad the Marshalls and their family friends the Olsens would have won the gold. The kids all cheered for Robert, Jamie and Ethan Olsen during the adult triathlon and it flipped during the kids' race with the Marshalls and Ethan's siblings Madison, 10, and Jacob, 8.

Jamie continued, "It is so fun as a family. It is great to be outdoors in the summer doing fun things as a family and it is for a great cause."

While he has participated in some races at school, this was the first triathlon for 14-year-old Ethan of Great Falls.

"It was fun and tiring," Ethan said. While the short 300-yard swim was difficult, the 10-mile bike was "very long." 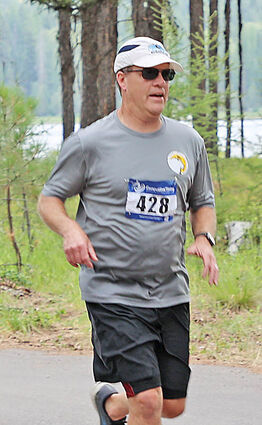 Doug McBroom of Helena and past resident of Seeley Lake finished first in the Men's Short Swim with a time of 1:08:24.

For the women's gold, Jenny Kirschner of Missoula won the long swim in 1:07:35; Olivia Gibbons of Kalispell, Montana won the short swim with a time of 1:09:59 and Makyla Belarde of Missoula was the sole participant in the mini swim finishing in 1:33:45. For the girl's triathlon, Amanda Hill of Helena won with a time of 22:21.

Cheri said her favorite racer quote of the day was, "This is the first lake I've ever swam in and it's the last lake I will ever race in."

While all the racers had their own individual goals and many were just racing against themselves the competition and camaraderie made for an "intimate event for a great cause."

"It truly is just a family-friendly super beautiful event," Jamie said. "Anyone can do it."

For the full results visit http://competitivetiming.com/results/2021/215007O