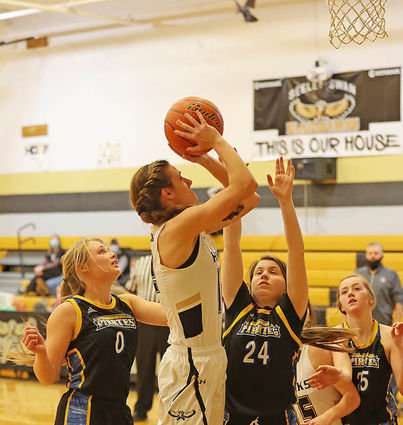 Senior Bethany Hoag shoots over a Pirate for 2 of her 14 points in the game.

SEELEY LAKE - The Lady Blackhawks and Blackhawks finished out their regular season with victories over the Victor Pirates Feb. 11.

The Ladies defended their home court while the Boys took the fight to Victor. The victories elevated the Blackhawks to 5-8 for the season while the Lady Blackhawks remain undefeated with a 12-0 record.

The Lady Blackhawks wasted little time sealing the fate of the Pirates. They piled up 18 points in the first quarter to the Pirates' 4, two of those from a technical foul when it was discovered that the Lady Blackhawks' book was missing a player's name.

The Pirates were shutout in the second quarter and the "running clock" went into effect early in the second half as the Lady Blackhawks continued to pound in baskets. They held the Pirates to just two more baskets and a free throw in the rest of the game. The final score was 67-9.

Bethany Hoag led the Lady Blackhawks with 14 points as she put in 5 baskets and went 4 for 5 from the free-throw line. Emily Maughan hit 6 baskets for 12 points while Sariah Maughan had 10 points. Sariah, Hannah Ayers and Aspen Conley each had a three-pointer in the game.

The Boys found similar success in Victor as they shut out the Pirates in the first quarter and allowed just 4 points by halftime while putting up 30 points of their own. The Pirates took a run at them in the third quarter but the Blackhawks finished them off 50-25.

Sawyer Shelmerdine scored 17 points to lead the Blackhawks. Chase Haines hit a pair of three pointers on his way to 15 points. Ben Haley scored 6 points while Jason James and Klayton Kovatch each had 4 and Oskar Murphy and Seth Richardson scored 2 each.

This week the Lady Blackhawks have a bye in the opening round of the District 13C tournament. They will play the lowest remaining seed that survives the first round Feb. 18 at 6 p.m. at home.

The Blackhawks faced Darby in their opening game Feb. 16. See Cory's Valley Market ad on page 16 for the tournament brackets. 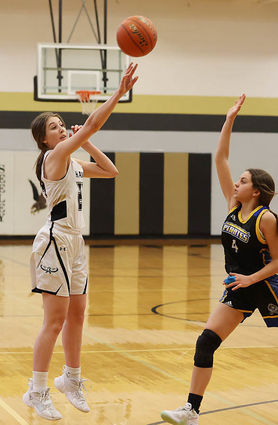