Blackhawks clash with Warriors in the rain 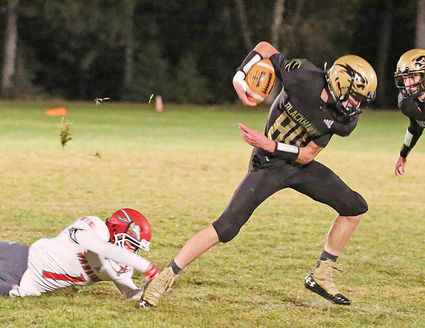 Sophomore Owen Hoag breaks free from the first of several defenders on his way to a 70-yard touchdown.

SEELEY LAKE – The Seeley-Swan Blackhawks hosted the Arlee Warriors for their last home game of the season Oct. 17.

The Blackhawks came out strong scoring a touchdown in the opening minutes and then following up with another with four minutes remaining in the first quarter. Both touchdowns were passes where Quarterback Walker McDonald connected with Owen Hoag. The first touchdown was a 29-yard play while the second was for 70 yards. Neither conversion was successful.

Both teams had several unsuccessful drives throughout the rest of the half until the final minute. Arlee took the ball in fo...