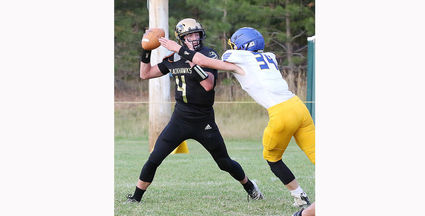 Junior Sawyer Shelmerdine prepares to send out a pass while being hit by a Pirate. He completed 7 passes including this 10-yard pass to Walker McDonald for a first down.

SEELEY LAKE – The Blackhawks kicked off to the Victor Pirates Sept. 4 for their opening game of the season.

The Pirates' opening drive came to an abrupt end after just a couple plays with a fumble that was recovered by the Blackhawks' Hunter Carpenter.

The Blackhawks' offense took over on the 20-yard line. After two unsuccessful runs up the middle, Blackhawks Quarterback Sawyer Shelmerdine went to the air. He sent a lateral pass to Owen Hoag who, with help from Ben Haley blocking, was able to take the ball up the left side of the field for a first down.

On first and goal, Shelmerdine was...