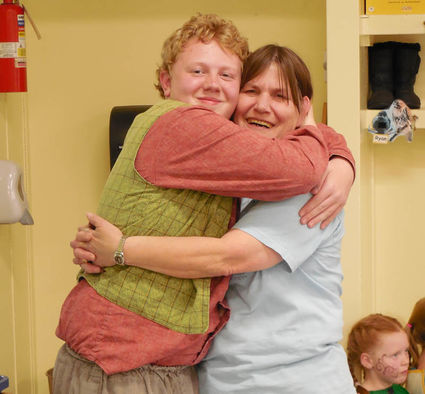 Swan Valley School custodian Dar Kearney hugs her grandson Jared Townsend. One of the highlights from her nearly 16 years as the custodian was when she got to see five of her grandchildren everyday at school.

SWAN VALLEY – "I think some of those teachers got glitter out just to get to me," said Swan Valley Elementary School custodian Dar Kearney laughing at the memories. "The older kids all knew, Dar hates glitter."

Just shy of 16 years, Kearney retired from her job as the Swan Valley Elementary School custodian at the end of March. While she is looking forward to having more time to spend on her home improvement projects, gardening and planting flowers, she will miss the students and treasures her memories from working at Swan Valley School.

When Kearney asked her boss at Cornerstone if he would help her get her boiler license, he asked why. She told him that someday the custodian at the elementary school was going to retire and she needed the license to apply. That was enough motivation for him to train her. She got her boiler license in December 2003 and was hired at Swan Valley Elementary School in May 2004 after the custodian retired.

"I didn't expect it to happen so quick," said Kearney who added she was excited to work at the school because "it was close to home, a steady job and I liked working around kids."

Since 2004 Kearney has been responsible for cleaning and all the maintenance at the school. She said she has done all the painting, has striped and refinished the floors taking 16-hours of asbestos training to be able to safely deal with the floors and dealt with minor electrical and plumbing issues on her own.

"In the early years it was just kind of a little bit of everything," said Kearney who filled in for teachers and for the secretary when needed. "Then it got to where I didn't have time to do that."

Kearney also maintained the lawns and planted all the flowers that now decorate the school grounds. She brought many of the flowers from her house as she tore out and rearranged her personal flowerbeds and also received tiger lilies from Swan Valley resident Todd Townsend.

"There wasn't one flower when I got to the school in 2004 and now I've got irises, rose bushes and daffodils," said Kearney. "My daffodils were already going to bloom when I left."

Kearney fondly remembers the staff Christmas parties and other gatherings "in the old days." She said she has been through a lot of teachers and supervising teachers and enjoyed the students the most during her tenure.

"It's always cool when you are walking down the hallway and the kids are going out to PE or something and they are all saying 'Hi Dar,' 'Hi Dar.' I just really loved that," said Kearney.

Kearney said something significant she remembers during her time as the custodian was when she had five of her grandchildren attending school.

"I think that was my biggest highlight was I got to see those grandkids every day go through school," said Kearney.

Kearney said she and now retired secretary Karen Anderson also became close friends. In the mid-2000s, they worked together to secure a grant through Missoula County Parks. It was used to purchase a new swing set and slide, a big accomplishment Kearney noted from her career.

After they got the grant, Kearney, along with Chris Barnes at CLB Landscaping, helped move the playground from the front of the school to its current location behind the school. This was a huge safety improvement keeping the students off Highway 83.

Kearney also worked on the field adjacent to the playground. When she started it was basically dirt. However, now it is covered in grass and usable for physical education classes and sports practice.

Kearney's battle with glitter has been long lived.

"Glitter would just get everywhere. Three months later you would still be finding glitter. Even mopping it wouldn't pick up all the glitter," said Kearney and laughing at the memories. "It would get on your hands and you learned every place you touched I can tell you that."

In the early 2010s, Kearney wrote a play entitled "The Grinch Janitor that Hated Glitter." The plot unfolded as the janitor stole all the glitter from the school and all the projects and decorations were black and white and dull. The seventh and eighth graders performed it.

"It was pretty cool," said Kearney and laughed.

The last six months, the school purchased a new backpack vacuum cleaner. Kearney said it picked up glitter even on the tile floors.

"It was awesome," said Kearney. "The last Christmas episode with glitter was not so bad."

Kearney said because all the floors are concrete at the school, it has taken its toll on her feet and joints.

"I decided before I'm crippled, I'm retiring," said Kearney and laughed. "It was time to do something different. I'm ready to clean my own house." 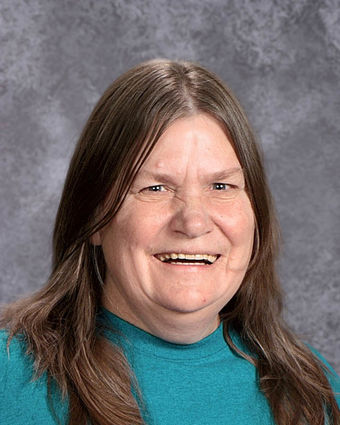 Dar Kearney looks forward to gardening and working in her flowerbeds and yard during her retirement this summer.

After working for over two weeks without any students, which she really missed, Kearney's last day was March 27. Kearney will continue to do the required water testing for the next few months and she can be called in if needed for boiler issues until the position is filled.

Kearney is looking forward to gardening, working on her yard and getting a lot more flowers going. Next winter she is excited to not have to go out every day to work and come home in the dark. She will miss Les meeting her every night in the driveway with his flashlight to walk her in from the truck.

"He says he will walk me anywhere I want to go," said Kearney.

Kearney said there will be a retirement party once the COVID-19 restrictions are lifted. While the school board has not filled the janitor/custodian position yet, Kearny just hopes someone will keep up with the flowers she has planted.

She said, "They just make it cheerful."