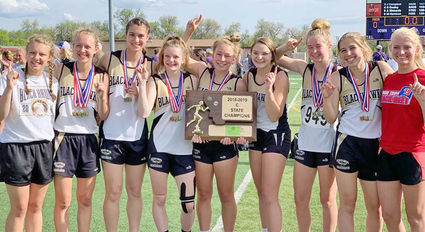 LAURAL MONT. - The Seeley-Swan Girls won the State Class C Championship while the Boys took second at the State meet May 23-25.

The Girls victory came by a wide margin with 90.33 points, nearly doubling second place Charlo's 48 points. The Girls were strong from start to finish winning the first event on Thursday and the last event on Saturday. On their way to the Championship the Girls took home more than a dozen medals including 4 individual gold and 1 relay team gold medals.

Terra Bertsch struck first for the Girls on Thursday, defending her title in the pole vault. Competition was stiff this year with the top five all clearing 9 feet but Bertsch prevailed after clearing 10 feet.

The Girls headed into Saturday with a commanding lead in the points but still had plenty of work to do.

Autumn Morse earned the Girls only individual gold on Saturday. She threw a new personal best of 130 feet 11 inches.

Bertsch took fifth in the 100-meter hurdles with a time of 16.91 and earned sixth place in the high jump clearing 4 foot 10 inches.

The 4x100 relay team consisting of Mercer, Bertsch, Maughan and Kovatch furthered their school record to 50.75 and earned second place in the event.

The icing on the cake for the Girls Championship was the last event of the day. The 4x400 relay team of Ayers, Maughan, Kovatch and Mercer finished in 4:08.42.

With no one competing in the pole vault Seeley-Swan's Boys started their hunt for gold on Friday. Gold medals proved hard to come by but the Boys found plenty of silver. In the field events, Nate Samuli threw his personal record of 165 feet 1 inch for second place. On the track Caleb Maughan set a personal record 2:01.47 in the 800-meter for second while Hunter Shelmerdine took second in the 400-meter with a time of 50.21.

The Boys headed into Saturday trailing Fort Benton 24-29 in team points. While the points race wasn't looking too bad for the Boys they were missing one key component on the team, sprinter Logan Robinson. It became apparent after he was unable to make the finals in the 100-meter that an injury was going to sideline him at state as it did at last week's divisional meet.

The only other individual points earned on Saturday came from Maughan who had his personal best jump of 6 feet in the high jump to earn fifth place.

Shelmerdine, Maughan and Wood competed in both the long and short relays.

Lane Mackie-Wendel joined the trio for the 4x100 to take third place with a time of 44.85.

Cordell Turner joined the trio for the 4x400 and finished in 3:27.96 earning the teams only gold in the final event of the meet.

In the end, Seeley Swan's Boys earned 52 points but was overtaken by Scobey with 62 points for the championship.