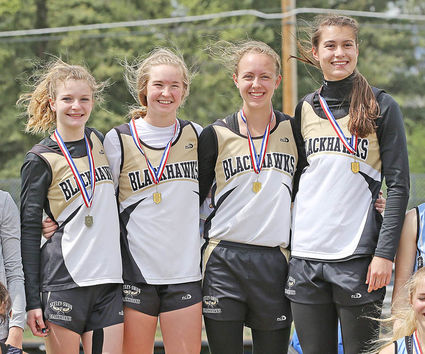 Lily Mercer, Terra Bertsch, Sariah Maughan and Klaire Kovatch with their medals after winning the 4x100 relay and setting a new school record of 50.89 seconds.

MISSOULA - The Seeley-Swan Girls won the Western C Divisional track meet May 16-17 outscoring second place Charlo 123 to 91.5 while the Boys came in second with 98.5 points behind Manhattan Christian with 103.

The Girls wasted no time making their mark in the record book. In the first event on the track, the 4x100 relay team consisting of Terra Bertsch, Lily Mercer, Sariah Maughan and Klaire Kovatch broke the school record with a time of 50.89 seconds. Mercer, Andi Bohlman, Alex Bohlman and Paige Holmes set the previous record of 50.95 seconds in 2016.

The relay team had been closing in on...