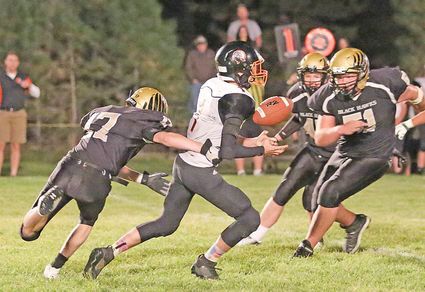 Sophomore Soren Moon knocks the ball loose from the Plains' quarterback. Chance Johnson recovered the fumble for the Blackhawks.

SEELEY LAKE - The Seeley-Swan Blackhawks hosted the Plains Horsemen Aug. 31 for their first home game of the season.

The Blackhawks came out strong and played a tough game but came up short on some key plays that kept them out of the end zone. Dakota Wood scored the Blackhawks only points on a 71-yard kick return in the first quarter.