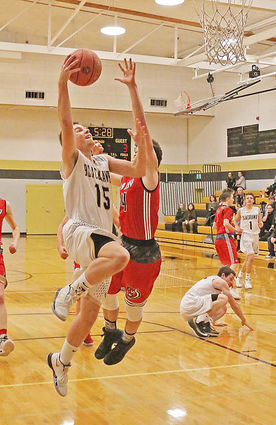 Junior Chance Johnson goes in for a layup early in the game against the Tigers. He scored 8 of his 13 points in the first quarter.

The Seeley-Swan Blackhawks and Lady Blackhawks faced a pair of district foes last week. They hosted the Darby Tigers Jan. 12 and then traveled to take on the Pirates of Victor Jan. 13.

The Boys traded shots with the Tigers early in the game and built a small lead by the half. The Tigers took a couple of runs at the Blackhawks throughout the game but the Blackhawks always stayed a couple shots ahead. The final score was 56-51.