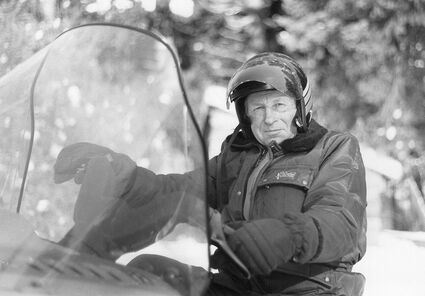 Jack Hooker was photographed recently while scouting the trail for the Governor's Cup 500 Sled Dog Race.

At least two Seeley Lake school trustees have questioned the wisdom of implementing a proposed AIDS policy at the school. They cite an apparent lack of information about the AIDS disease that has become America's number one health issue. School trustees have been exploring the idea of adopting an AIDS policy similar to the one used by School District I in Missoula. The policy states, in a roundabout-way, that school administrators and trustees would allow students or teachers afflicted with AIDS to remain in school. Ken Kopke, Seeley Lake trustee, was outspoken at last Thursday night's meeting, in his opposition to the proposed policy. "It seems these days that we are very concerned with the rights of individuals -the rights of the minority. What about the rights of the majority?  We should not have an AIDS student; we should not have an AIDS employee."

The Commissioner of State Lands was in Seeley Lake last Friday evening to discuss new regulations which have resulted in massive rental increases for holders of cabin and homesite leases, Commissioner Dennis Hemmer faced a sizable crowd of disgruntled leaseholders in the gymnasium of Seeley Lake Elementary.

Pioneers of the L.O.S.T. Race

The Seeley Lake 200 Sled Dog Race actually began in March of 1978, and was then known as The L.O.S.T. Race - The Lincoln-Ovando-Seeley Trail. Jack and Karen Hooker of the White Tail Ranch near Ovando were instrumental in organizing the race. Jack had enjoyed sled dog racing for many years, and even competed in the famous Iditarod Race in Alaska. One March morning in 1978, Jack Hooker announced to Karen that, "We're gonna have a race." He left that afternoon to chart a race course between Lincoln and Seeley. 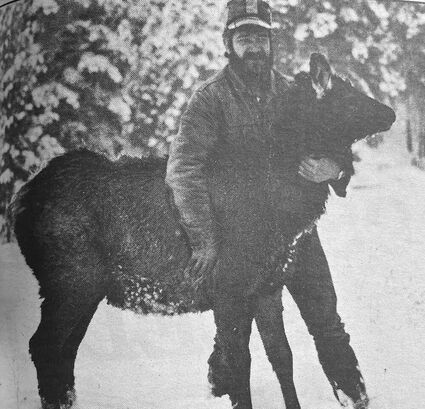 Bottom, left: This calf elk was found tangled in the barbed wire fence along Highway 83 about two weeks ago. Randy Teague just happened to be going by when he saw the animal. Ed Coile stopped to help and managed to take this picture while Randy was holding the calf and rubbing its legs to get circulation going again. It didn't take long for the calf to recover -he soon trotted back onto the game range.

Trophies for the Seeley Lake 200 Sled Dog Race which begins this week were carved by Seeley Lake artist, Rollin Welch and donated to the Wilderness Sportsman's Club.

To read more from this issue, please visit: https://www.seeleylake.com/home/customer_files/article_documents/1988-01-26.pdf

Dan and Renita Ruth, a Seeley Lake couple charged with multiple felony and misdemeanor poaching charges, turned themselves in to authorities in Missoula Monday evening, January 20. The couple, labeled "serial poachers'' by state wildlife officials who seized antlers and other evidence involving more than 100 trophy-class game animals, had been sought in Pennsylvania on charges filed in December, and had been considered fugitives. when they were not at their home on 20 acres on Woodworth Road in the Kozy Komer area when officers went there to arrest them in late December.

To read more from this issue, please visit: