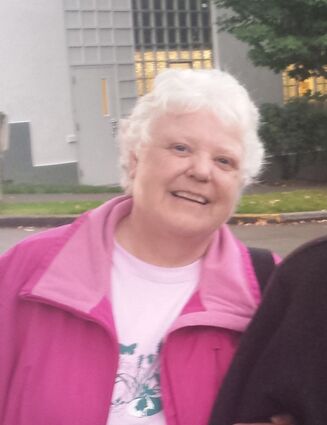 Jolene Jacobsen Hult, currently of Deer Lodge and formerly of Potomac, passed away unexpectedly in Salt Lake City on Dec. 13. Born Aug. 22, 1956 to Harry and Dorothy Jacobsen in Deer Lodge, she was one of four girls.

Jolene grew up in Deer Lodge, where in 1975 she met the love of her life, Ralph.  After a short courtship, they were married in December 1975. In 1976, they welcomed the first of three girls Hollie, Heather and Corrie. They first lived in Lolo, then Missoula and made their final family home at Potomac in 1983.

Jolene worked at the University of Montana for over 30 years and was very proud of her job. She enjoyed quilting, cooking and hosting the many family dinners at their home.

We all know that her fabric collection rivaled the many quilt stores in the area.  Family

was her pride and joy along with the many quilts she made over the years.  She was

known for making many meals for Ralph when he was working out of town, often

sending way more food than needed to feed the other loggers he worked with. She also enjoyed spending time with her three grandsons, Hunter, Brayden, Paxten and her younger sister Kathy.

After the passing of Ralph in 2016, she sold the family home in Potomac and moved back to Deer Lodge to be closer to her sister, where she lived quietly until her passing.

Jolene is preceded in death by the love of her life Ralph, her daughter Hollie, her

Services will be held in the spring. She will be buried next to her daughter and husband.