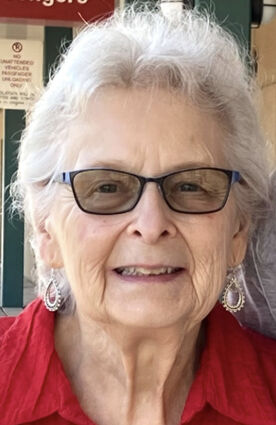 Sharon Moody, 79, of Ephrata, WA went to be with her Savior, Jesus Christ, on Wednesday, December 7, 2022. She was born March 3, 1943, in Tucson, AZ to Stephen Joseph Evans and Irene Darko Evans. Sharon graduated from Catalina High School in May 1961. She attended the University of Arizona the next two years where she pursued her love of library science. Sharon enjoyed working in the libraries of the University of Arizona, Arizona Western College, and Tempe McClintock High School.

Sharon met her husband, John, in a college student Sunday school class at Trinity Presbyterian Church, Tucson, AZ. Following an 18-month courtship, they were married at High Noon, August 22, 1964, in that church. She gave birth to their first son, Stephen Robert, eight years later in Tempe, AZ. Fourteen months later, and after moving to their new home in the Wellton-Mohawk Valley, Sharon gave birth to their second son, Charles Hall, in Yuma, AZ.

A devoted wife and mother, Sharon often chose to participate in activities with her husband and/or sons, even if it was not something she was comfortable doing, such as camping and fishing. She attended her sons' athletic activities and would be one of the loudest parents at the events, sometimes to the embarrassment of her sons. She would be highly concerned and prayed for her sons when they participated in more adventurous activities. Sometimes her sons withheld telling her of certain activities until after they occurred so that she did not stress. Sharon loved, cared for and prayed for her boys. The greatest joy she received was having both of them come to faith in Christ Jesus as their Lord and Savior. She would continue to pray for them and encourage them in their faith and walk with Christ Jesus.

When Sharon's husband, John, was the Farm Manager at Snyder Ranch in the Wellton-Mohawk Valley, Arizona, Sharon worked in the lettuce fields during the 1977-78 produce growing season. She loved working with other farm wives and friends, this all-lady crew did thinning, weeding and harvest. Sharon was compassionate and loved-on people. Through volunteering, participating in church activities, being a part of Bible studies, or hosting groups, she garnered many cherished friendships. She enjoyed praying with and for others, and as able, helping them in their need. She would check on individuals to see how the person was doing, pray with them, and see how she could help.

In November 1988, John, Sharon and the boys moved to St. Ignatius, Montana.  The family attended the local Assembly of God church, where they met the McPherson family. Sharon became good friends with Mike and Kay during the time she lived in St. Ignatius.  As the friendship grew between the parents, a friendship also grew between Sharon's younger son, Charles, and Mike and Kay's older daughter, Brandy.  Soon this friendship would become family, when in 1997 Charles and Brandy were married.  She formed a close motherly bond with Brandy, never thinking of her as an "in-law," but as a daughter to love and to encourage her relationship with Jesus.

Over the past 13 years, Sharon would spend Christmas and Winter in Yuma, AZ and most of Spring through Autumn at the family cabin in Seeley Lake, MT visiting family and friends.  Wherever Sharon was, she showed everyone the love of Jesus with simple words, from greeting people with "Jesus loves you", to ending a conversation with "Have a blessed day!" One of Sharon's greatest joys, besides her two boys and "daughter," was volunteering at the Alabaster Box Christian Bookstore in Ephrata where she encouraged all who entered the store and prayed with those who asked for prayer. At home she could be found in her office chair reading or listening to scripture, praying for family and friends. Even while she was in the hospital she prayed for others, greeted nurses and doctors with "Jesus loves you," praying for them, and planting a seed for all who entered the room. She finished the race; running well in faith and encouragement. She endured to the end and now is in the presence and glory of her Savior Jesus Christ.

Sharon's memorial service will be held at 11:00 am on January 7th, 2023, in the Desert Church, Ephrata, Washington.

A second memorial service is planned for Spring in the First Presbyterian Church, Yuma AZ.