By For the Seeley Swan Pathfinder 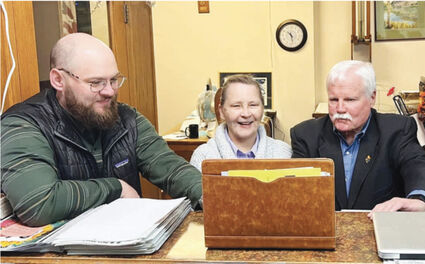 Jesse Mullen, left, Cynthia and Steve Haynes announce the sale of the newspapers with their staff over a video conference in Oberlin, Kansas.

KANSAS - Steve and Cynthia Haynes sold Nor'West Publishing/Haynes Newspapers on Dec. 1, 2022, 42 years to the day after they purchased their first newspaper.

Brothers Jesse and Lloyd Mullen, owners of Mullen Newspaper Company, and the new owners of the Seeley Swan Pathfinder newspaper, worked with Haynes to acquire one daily newspaper, one twice weekly, four weekly newspapers, and a market shopper product.

The publications are based in Northwest Kansas. Jesse is the Chief Executive Officer of Mullen Newspaper Co., and Lloyd is the Chief Operating Officer.