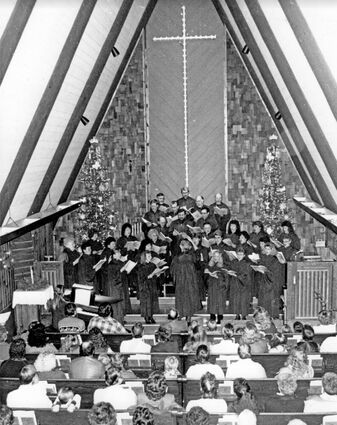 The Swan Valley Christian Singers in a 1987 performance captured from the Pathfinder archives.

Bob Scott was elected chairman of the water board at last week's regular meeting. Scott, who served on the board several years ago and who was reelected in November, is widely known throughout the community for his interest in water issues. During the meeting, Scott conducted' lengthy review of various financial, legal, and operational matters in order to better acquaint the entire board with the status of the water district. Scott also intends to schedule a planning meeting, with the goal of developing a more unified approach to the district's problems.

Sunshine to Apply Soon for Lincoln Mine Permit

Vernon Sunshine Mining Company is about two weeks away from submitting their final gold mining application to the State of Montana Hard Rock Mining Bureau, according to Mark Hartman, who is Sunshine's director for the Lincoln, Montana, project. The open-pit, cyanide heap leach gold mine is proposed three miles west of Lincoln not far from the banks of the Blackfoot River. The Big Blackfoot Project, as it has been called, lies north of Highway 200 and is about 300 feet uphill from the Blackfoot River. As might be expected with such a project, there is heated debate in the Blackfoot Valley over the costs and the benefits of the proposal.

Their recent exploration efforts, spurred by a favorable gold market, have been concentrated in Montana near Lincoln. "We are looking forward to moving into Lincoln," Hartman said recently.

He added that Sunshine expects to hire around fifty or sixty employees if its permit application is approved.

The race is scheduled to start on Saturday afternoon, February 11 following the traditional Friday night banquet at Carroll College. This race, being run for the fourth year, is normally called Thc Governor's Cup, but has been temporarily renamed to celebrate the passing of Montana's 100th birthday.

Community Hall Improvements Made This Year

This past year has been a good one for the Swan Valley Community Club. Frontier Days in June and the Fourth of July 0-Mok-See were each a success, along with the Arts and Crafts Sale in December,

A number of improvements and repairs have been made at the Community Hall this fall.  The floor has been refinished, some caulking has been done, and the water pump has been rewired.  The Community Club is in the process of getting a different refrigerator and new folding chairs and tables.

Michaela Dunlap and Ivy Balcom won a guided hunting trip with Rich Ranch this past season with their essays on Hunter's Ethics.

The Rich Ranch has been giving students who take Hunter Education a chance at a guided hunt for the past ten years.

This hunting season was a tough one for Blackfoot Valley deer hunters.

We've known that deer numbers were falling throughout northwest MT since 2007, but indications are that our white-tailed deer herds are now at levels we haven't seen since at least the early 1980's, and in some areas mule deer may be lower now than at any time since the 1960's.

Last Friday morning started like any other for Littlebird's proprietor Vicki Voegelin: wake up, take care of the dogs, get her son off to school and head to work.

It was when she arrived at her restaurant in downtown Seeley that Friday became unlike any other. Voegelin pulled into Littlebird's to see two of her trees had been cut down and left on the ground. She immediately called the Sheriff's department to report the vandalism.

Felling a couple of trees is not where the destruction ended, however. Last Thursday night/Friday morning someone broke into Bison & Bear Mercantile.

"It appeared to be a shopping spree," commented Sandi Irons, store manager.

"They took mostly jewelry." The perpetrators did take some cash, credit card slips and checks too.

There was a rash of break-ins this past year, including at Seeley Lake Elementary School and Mission Bible Fellowship.

U.S. News and World Report ranked Seeley-Swan High School (SSHS) as one of the top 15

schools in Montana and awarded it the bronze medal for being one of the top schools in the Nation.

This ranking comes after U.S. News and World Report teamed up with Washington, D.C. based American Institutes for Research to analyze 21,776 public schools across 49 states and the District of Columbia.