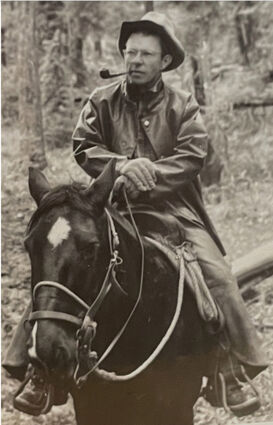 David was born in Madison, Wisconsin in March of 1930 to Gaylord and Frieda Owen.  He grew up in Wisconsin and developed a lifelong love of the outdoors, including hunting, fishing, working, and playing football on the high school team.  Following graduation, Dave spent a year in the army and then moved to Montana, earning his Airborne wings as a reservist, and, shortly afterward, becoming a smokejumper for the Forest Service out of Missoula, Montana.  He continued to jump fires during the summers, and on weekends, as he earned a bachelor degree in Rangeland Management from the University of Montana's School of Forestry.

Following college, Dave began a career in the Forest Service working on several Ranger Districts in Idaho.  In 1958, Dave started his first job as a District Ranger on Big Prairie Ranger District (now part of Spotted Bear Ranger District).   It was at this time, that Dave most likely fell in love with the Swan Valley, as Holland Lake was often his jumping off point to ride over Gordon Pass, leading a mule string down Gordon Creek to the South Fork of the Flathead, and to his headquarters at Big Prairie Ranger Station.

David would have stayed at Big Prairie for the rest of his career, but at the time, the Forest Service did not let its Rangers stay in one posting too long.  He went on to work as Ranger for the Ninemile, Superior, and Spotted Bear Ranger Districts.  The Swan Country stayed with him.  In 1967, he and his wife Kathryn (Kay) bought a parcel of land near Condon.  They moved an old homestead cabin from Ninemile to their land the following year and the cabin became a focal point of family gatherings, work parties, and hunting trips.

Following retirement, Dave enjoyed travel with his wife Kathryn.  He also enjoyed painting and drawing cartoons, and both Dave and Kay, started downhill skiing again.  They enjoyed skiing at Big Mountain and Blacktail Mountain until Dave was into his late 80s.  Most of all, though, Dave enjoyed going down to the place in the Swan Valley.  Thoughtful management of this forest was one of Dave's and Kay's greatest pleasures and legacies.  Dave remained active working on the place in the Swan until he reached ninety years of age-the year he skidded out his last load of logs with the help of his children.

To our beloved husband, papa, grandpa, and great grandpa we are eternally grateful to have shared so many years with you and send our love with you as you begin your next adventure.

A celebration of life will be held at Darlington funeral home in Kalispell on December 15 at 2 o'clock.  In lieu of flowers kindly make a donation in Dave's name to the Bob Marshall Wilderness Foundation at bmwf.org.