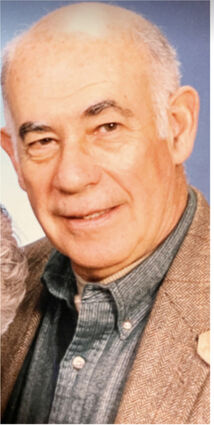 Al was born on Oct. 5, 1929, to the late Eugene and Lila Lewis Rogers on the island of Martha's Vineyard, Mass.

Following high school, Al left the Vineyard and attended Samson College and Rensselaer Polytechnic Institute in upstate New York where he graduated with a degree in Aeronautical Engineering, and in 1955 received his master's degree from New York University.

In 1951 Al began a long and successful career with Grumman Aerospace Corporation in Long Island, N.Y. Starting in flight testing and preliminary design, he went on to manage programs for many of Grumman's sophisticated military aircraft and retired in 1988 as West Coast Business Development Manager.

In 1960 he and Jane Conner were married and together they raised their daughter, Anne, and son, David. They were divorced in 1987. Al passed on his love for adventure and learning to his children. He was an excellent marksman and won many shooting competitions while living in New York.

After retiring from Grumman, Al moved to Montana and continued working and consulting in the field of aeronautics. On a serendipitous trip to Canada in early 1990 he met Adrienne Small. They were married later that year, and after a few years living in Long Island and Martha's Vineyard, they moved to western Montana, eventually settling in Seeley Lake.

In Montana, Al continued his hobby of carving beautiful ducks and birds, and pursued his lifelong love of hunting into his 90s. He will be remembered for his quick-witted humor, his life stories and his positive outlook on life.

Predeceased by his sister Jeannie and brother Francis, Al is survived by his wife, Adrienne; his children Anne Fischer of Billings, Mont., and Dave (Lynn) Rogers of Seeley Lake; his Canadian stepchildren Laurie Lechow, Michael Sizer and Stephen Sizer; his sister Myrna (Milton) Sylva of Tampa, Fla.; and numerous grandchildren and great-grandchildren.

A dear husband, father, grandfather and friend, he will be truly missed.