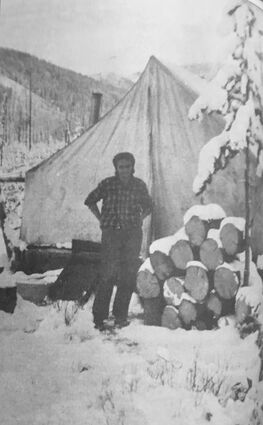 The Chaffin camp on Otter Creek in the Bob Marshall Wilderness during the 1950s. Mildred Chaffin pictured here in front of the camp tents.

In celebration of 36 years of the Seeley Swan Pathfinder, we will run parts of articles that appeared in the issue 35 years ago and 20 years ago. The entire issue will be uploaded to our website seeleylake.com for you to enjoy.

Alone in the Bob

The hunting season was drawing to a close. Our helper had found other fields of interest, so I had gotten promoted. I was not chief camp guard!

On the last trip that season, we were scheduled to outfit two hunters from Miles City along with some of our friends. It was my lot to stay in camp, while the men rode out to greet out guests.

There were a couple inches of snow and a few flakes falling when the string pulled out of our Otter Creek camp that morning. My man waved a cheery good-bye and promised to be back in two days. I felt just a little uneasy for I'd learned enough to now that one man could run into a heap of trouble with 11 head of horses on a slick trail.

One day dragged by - there were scarcely any chores to do except cut wood and I soon tired to that.

The second day arrived and I flew at the preparation for company. Meanwhile, the weather was looking worse. Came night - the coffee pot was hot on the back of the stove and supper needed only finishing touches, so I sat down to wait.

I seldom light a lantern when I'm alone unless I have reading or sewing. I love to watch the firelight play. It puts me in a mood for dreaming.

Something had held them up but they'd be here tomorrow.

Tomorrow came and went, the same as yesterday and I went to bed mighty worried. I had moved my bed into the cook tent and put it on the bench at the table. Apple boxes supported one side, so I could keep a fire and protect the food from freezing.

There was no lack of entertainment that night. The dog and the bear were at it again! But they were of secondary importance now - just so they didn't come in the tent...

To read the rest of this article and more from this issue, visit https://www.seeleylake.com/home/customer_files/article_documents/1987-11-25.pdf

Voyage of the Rigil Kent

Joseph Conrad, the great 19th century author of seafaring tales, would have been enchanted by Al and Jean Slaight. The Slaights, who moved to Seeley Lake last spring, share many of the attributes of Conrad's most memorable characters - love of the sea, a thirst for adventure and a readiness to turn mere dreams into reality. Before moving here, Al and Jean spent the previous seven years sailing 'round the world in their 46-foot ketch, the Rigil Kent.

The story begins in 1972. Al was a prominent lawyer in Southern California who, with Jean, had a penchant for weekend sailing. As Al says, "We thought we really knew our stuff."

Heady with romantic visions of sailing the South Seas, Al quit his job and bought a 40-foot ketch. The next couple of years were spent cruising in the Pacific, on what turned out to be the training exercise for their around-the world odyssey.

One their very first days on the high seas, Al recalls the chilling moment when, some 40 miles offshore from California, the boat started taking on water - and he realized there was no Coast Guard available. Later that night, they sailed through a pod of whales, wondering whether they might be rammed and sunk. Thus, the "weekend sailors" began their initiation into deep-sea cruising.

Eventually, Al's old firm enticed him back and from 1974 through 1979, he continued to practice law. The lure of the sea proved too strong, thought, and Al and Jean set forth in the Rigil Kent in February of 1979. Their sole companion was "Earl," their intrepid Labrador retriever. They had no agenda and no itinerary but they were the sole masters of their craft and their destiny.

Adventure in the Pacific

The first few years were spent in the Pacific: Samoa, Fiji, the Philippines, Indonesia, Tahiti and other exotic ports of call. Tahiti was a particular favorite. According to the Slaights, the Polynesians are the "most fabulous people in the world - unbelievably hospitable and generous." Until recently, it was against the law for a native to run a store in Tahiti; Tahitians have a tendency to literally give away the store....

To read the rest of this article and more from this issue, visit https://www.seeleylake.com/home/customer_files/article_documents/1987-12-03.pdf

Humanitarian service is the goal of all Lions. The Association was founded for the purpose of serving others ad in so doing, make our world a better place. In 1973, the association and Lions Club International Foundation recognized the need to establish a special commendation for a particular dimension of service. As a result, the Melvin Jones Fellowship was created. The Fellowship is not an award rather, it is a recognition given to humanitarians...

This year the Seeley Lake Lions Club was honored to have two of its members recognized. Lions Thom McAnally and Lion Karen Montgomery were each presented with a personal inscribed wall plaque and a lapel pin that identifies them as a Melvin Jones Fellow. In additional, their names will be displayed on a computerized plaque in the LCIF Recognition Room at International Headquarters.

Effort underway to raise over $25,000 to match grant for sewer study

The Sewer District received $6,550 in cash and pledges to start the ball rolling on a fundraising effort to pay for a Preliminary Engineering Report (PER).

The amount was gathered at a meeting attended by more than 30 local businessmen on Nov. 20.

The group gathered at the Senior Citizen's Center to listen to Roger Johnson and Larry Marx explain the need to fund the PER being proposed by the Seeley Lake Sewer District Board.

The Board had originally planned to request citizens residing within the district to raise the funds needed to qualify for matching grants from various sources. The amount of be raised by residents would be approximately $25,000.

Johnson said the Sewer District, established in 1992, is very small and residents residing within the district should not have to bear the sole expense of the study with would examine water quality in the valley.

"Residents of Seeley Lake want to maintain good water quality," Johnson said. "We should all share in the costs of the study because it benefits all of us even if we don't live within the sewer boundaries."