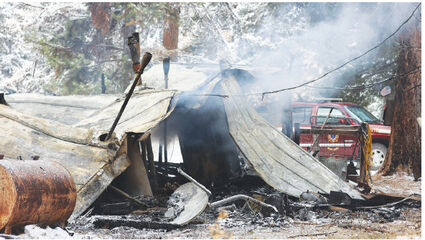 Not much left remained following a fire in a double-wide mobile home Nov. 9 where one person died, north of Seeley Lake.

One person has died in a house fire just north of Seeley Lake, in a blaze that was reported late Wednesday night, Nov. 9, on Hwy 83.

Seeley Lake Fire Chief Dave Lane said the structure was about 50% ablaze when crews arrived at the double-wide mobile home along the highway, after being alerted to the fire at 11:29 p.m. One engine, a utility vehicle, a command vehicle and an ambulance attended the scene.

Lane said the crew of four had been advised that there was "potential for an occupant" and confirmed they had found the deceased person at the scene.

Lane said the cause...