Lynx and tourists and bears!

Grace Siloti, of Condon, addresses the panel and audience during the Oct. 4 public hearing at Seeley Elementary School.

Time after time, area residents hammered home the lengthy list of reasons they hate the proposed expansion of the nearby Holland Lake Lodge.

Their concerns include, but are not limited to:

• Negative impacts on wildlife and habitat;

• Safety for an increased number of visitors who will come in contact with grizzly bears and other predators;

• Increased vehicle traffic through Condon and nearby towns like Seeley Lake;

• The attraction of newcomers who would move here permanently and drive up the cost of living;

• A simple loss of history and tradition.

An estimated 300 attendees, many of them holding "Hands Off Holland" signs, attended a public hearing Oct. 4 at Seeley Lake Elementary School. That meeting was preceded by one in Condon the same day.

Most of the Attendees were staunchly and overwhelmingly against the proposed expansion. It was their last chance to give live comment before the current deadline of Oct. 7.

But out of that meeting came at least one definable call to action: That the public hearing process be extended for another 30 days to give area residents more time to digest the complicated and lengthy amount of information. (See the open letter to Steele on Page 2 of this issue.)

Right now, the plan if for the review board members to deliver a proposal by March 2023 to Flathead National Forest Supervisor Kurt Steele.

Kurt Steele is the deciding officer for the project but not until it has gone through a public hearing process, environmental and commercial review, a potential reworking of the overall plan, then, if approved, a second round of public hearings before a final decision will be made in March 2023.

But Dennis Hawver, who calls himself Dennis the Menace, was not convinced public input would change the eventual outcome.

"Everybody can see what is going to happen. It is going to change the way we live," he said at the Seeley Lake hearing. "It's obvious we are all here against this...but you can follow the money. It is a done deal guys, watch."

Steele said that is not the case.

The forest service has no say if the owner wants to sell but does determine the sustainability of the project, he said. "It is our job to make sure future generations have access to this property."

Despite what is commonly accepted as fact, Wohlfeil is still the majority owner of Holland Lake Lodge. He sold shares to POWDR on Oct. 21 but has not produced facts about the financing or legal relationship.

That being established, Carohne Lonski said carea groups could still work with Wohlfeil to determine is there is still a way for him to, "get his value out of the lodge," before selling it to a third party.

In an attempt to quell some heresay, POWDR spokeswoman Stacey Hutchinson said, "We are not doing a ski lift, there will be no helicopters and no motor boats on the lake."

Holland Lake was constructed in 1924 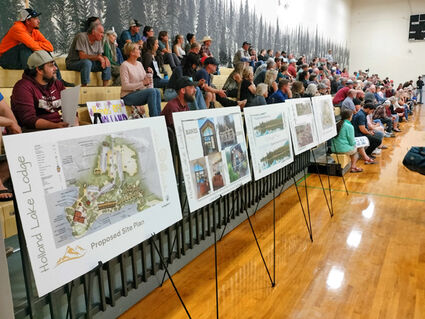 Wohlfeil said POWDR understands the special use permit system because they deal with it at several ski resorts.

He thinks they have good resources, are a young and forward thinking company and they are into doing things the right way.

Wohlfeil went under contract with POWDR in January of 2021 and they did a two-phase purchase.

POWDR bought a portion of Wohlfeil's company in October of 2021 and plan to completely buy out Wohlfeil next spring. There is a steep penalty if POWDR backs out according to Wohlfeil.

Wohlfeil doesn't think anything in the proposed expansion was set and POWDR is open to suggestions.

The deadline to comment is Oct. 7. For more information visit http://www.fs.usda.gov/project/?project=61746.