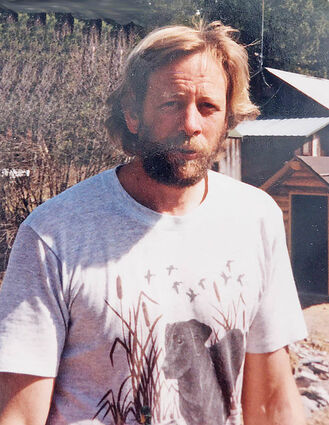 SWAN VALLEY - Ted Graf left this earth on the morning of Sept. 14 after living a life on his own terms and in his own way for 69 years.

Ted was a rugged individualist. He may have softened some in his later years to enter the world of cell phones and commercial flights, but he still cast a unique shadow. Born and raised on the plains of Nebraska, it didn't take him too many years to want to escape the conformity and mundane rigidity of life there. It seemed that Montana - like it was to countless others in history - offered freedom from having to earn a living in the conventional way and instead became a haven for characters like Ted.

Ted arrived in the Seeley-Swan Valley in 1978 the same way the first whites came - by horse and mule. He rode Lloyd, his not so trusty mule, over 1,500 miles on a round about, circuitous route from Nebraska to here. He established great stories where rural people in three states put him up, fed him and sometimes offered shelter. This, to most, was a legendary trip, but Ted seldom mentioned it and for the most part did not like to talk about it, leaving others to embellish it.

He was a skilled mason, initially laying block and bricks and eventually graduating to rock work - specializing in fireplaces, wainscoting and patios. Numerous houses in the Swan Valley have been complimented by Ted's ability to weave stone and mortar into a work of art. He always took pride in his work and said that he was an Independent contractor - capital I and small c. So that meant you received a great finished result, but had to wait for it.

When you live in Montana and do not get out and enjoy the country you are only paying lip service to it. Ted climbed mountains, floated rivers, skied, snowshoed, hiked and crawled into the seldom visited areas. He was an avid cross country skier and made numerous trips into the Bob in mid-winter, sometimes getting lost, confused, worn out, but never defeated. One winter he slept at the epicenter of a 6.0 earthquake above Upper Holland Lake. It was preceded by a sonic boom-like blast but Ted never stopped snoring, only to be informed of it upon coming out of the hills.

Without a doubt, Ted's character had its nuances but he was honest to a fault. Even to the degree of pointing out and laughing about his own lack of respect for time and the fine art of procrastination. This self-effacing nature endeared him to others. He would sometimes repeat to me a line from "Lonesome Dove," "Woodrow, you do twice as much as most folks. I feel it's only right to do half as much to even things out."

Ted seldom judged others (except certain politicians) and realized the log in his own eye prohibited him from seeing the speck in yours. Besides the love of good food and the consumption of it, Ted loved music and the inspirational mood lift that good lyrics, skilled instrumentation and a great melody could do for your soul. He entertained many, playing his guitar and singing at numerous parties and holidays. He loved all genres of music (well maybe not opera) but I will never hear a Bob Dylan or John Prine song without immediately reflecting on the song's perspective through Ted's interpretation.

Leon Russell wrote a song that reminds me of Ted. It deals with other's perspective of you as you hitchhike through life. "Many people look my way. Many pass me by. In moments of reflection, I wonder why. To the mothers I'm someone else's son. To the preacher I'm a sinner. Lord. I'm not the only one. To the hobo I'm in prison by everything I own. To a soldier I'm just someone dying to go home. Magic mirror, if we only could. To see ourselves as others would."

There are certain people who enrich and embellish our lives, seldom is it the self important or the big talker. Ted enriched my life and countless others by being a simple, witty, straightforward, honest, headstrong Individual. Capital I words and exclamations don't adequately frame how much we will miss him.

Ted's father and mother preceded him in death.

He leaves behind his sisters Julie Graf in Los Angeles, California and Kate (Rich) Murphy and their children Carly and Jack, Colorado Springs, Colorado; his brother George (Vanessa) and their children Izzy and Tatum, Colorado Springs, Colorado; cousins Bill and Paul; special Nebraska "daughters" Charity Rieves, Nicola Kugel and Emma Buechel and their spouses and children; dear friends Will, Cyd, Abe and Emmy Kats; special Condon friends Raymond Fox, Rick Birdwell, Kathy Koors, Buck and Sue Stephens, Ferndale, Montana; his sweet dog Missy; and many friends across the globe, in the Seeley-Swan Valley, those from the Nebraska days, the Baja, Amsterdam, Thailand, Mexico and Columbia.

A special Thank You to all the wonderful people of Partners in Home Care and all Ted's "professional staff."

There will be a celebration of Ted's life in the Swan Valley in 2023.

Ted always felt like a gentle soul. He had a charisma that contained genuineness, humor and good naturedness. At least as a younger person he also had some mischief. I still remember going to Kings cafe with Ted one day and he took the ketchup and mustard containers and slathered the plastic menu and closed it up. I remember how much he loved reading. He had a clear, understated intelligence. Seems like Montana really worked for Ted. I was finally able to forgive Ted for always using the Ame's riding mower while I had to use the push mower. What a great smile he had. Sharing it often.

Ted has always been his own person. Even as a young kid. We walked together our first day of kindergarten and every day as we attended Bryan school, Holmes and Lefler. He never really liked sports but he was always up for doing things. He was the only person I knew who had a swimming pool and we spent hours in it. He never really seem to care what other people thought of him. Which was pretty unusual for any kid our age. They say he was the smartest kid in school but he never let you know it. One of my favorite memories was when Ted excitedly called me up on the phone told me to hurry over because he had just purchased the new Sgt. Pepper album just released that day. We listened to it on a little portable record player on his porch over and over and over again. He loved all kinds of music but especially Bob Dylan, probably because he was an iconoclast just like Ted. After the Reunion last year a bunch of us walked down to Barrymores and Ted and I reminisced as we walked. He remembered great sandwiches my mom made and I remembered how kind and funny his mom Nan was. I thought of the miles that the two of us had spent walking to various schools and girls houses. After we'd been drinking a couple hours we all parted ways and I watched as Ted walked, silhouetted in the light, up 13th St. I looked at him and thought, we are all fortunate to have known an individual who had the drive and character to put all of his life belongings on a mule and walk him to Montana.

Ted was one of a kind! Great mason, great friend, and one tough hombre. We played much music together in the Swan over many years. I’ll never forget the first winter we met. Even though it was extremely cold, he insisted on living in his car that first winter! He built a solid foundation for our home and I’ll always remember his wit! RIP

Dear Katie: I am sorry to hear of the passing of your brother and my classmate Ted. My thoughts and prayers are with you and your family. I had known Ted since fifth grade and we always had a friendly competition in classes, especially math. For Ted's 5th birthday, he asked me to stay overnight at your house. Your Dad gave us $5 to walk to King's on South Street for dinner. We couldn't spend it all or eat it all, even though we were growing boys and went through hamburgers, cheese frenchies, a family order of fries and rings and milkshakes. We laughed again about that dinner at our high school reunion, 57 years later last fall.