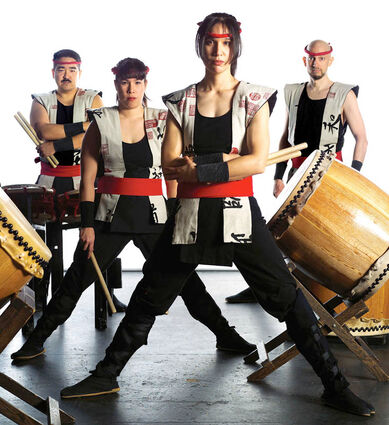 This four-person band reinvents traditional Japanese drumming with their eclectic and energetic performances that are part martial arts athleticism, part mediation and all rhythm. Collaborations with a wide range of groups including classical, funk, jazz and ballet have continued to fuel their pursuit of excellence and innovation in this ancient art form.

Fubuki Daiko performed in Seeley Lake in 2016 and our audiences and students were energized by their high-powered style of Japanese drumming.

“Watching the faces of the children light up when Fubuki Daiko started their workshop was amazing. The four members energy and enthusiasm, in demonstrating the ancient musical technique of the temple drums was evident in the excited reaction of the students,” stated Seeley resident Gene Schade.

The core members of the group each have over 25 years of experience with these unique Japanese drums, called taiko. Archeological evidence shows that they were present in Japan during the Sixth Century. Their function has varied throughout history, ranging from communication, military action, religious ceremony and concert performances. The core members of Fubuki Daiko received their training from the founder of North American Taiko, Grandmaster Selichi Tanaka. They have performed at Carnegie Hall.

Fubuko Daiko is appearing in the valleys as part of a Western Montana tour. The Dennis and Phyllis Washington Foundation, the Western Arts Foundation and the National Endowment are supporting their residency for the Arts.