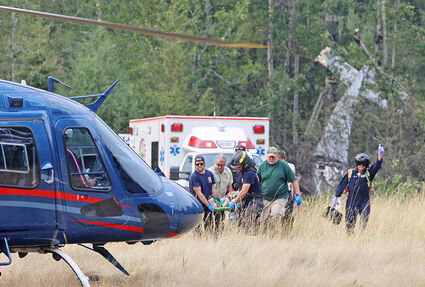 Seeley Lake volunteer firefighters and law enforcement officers carry an occupant of a small, single engine aircraft to Life Flight Saturday, Sept. 3. The fixed wing crashed in the Double Arrow Homestead Commons area just after 3 p.m. Both occupants survived and were transported to Missoula via helicopter.

SEELEY LAKE – Just after 3:15 p.m. Saturday, Sept. 3 emergency responders were dispatched to a plane crash reported south of the airport. Within 15 minutes of the report emergency responders where on scene were a small, single engine aircraft was found in the trees in the Double Arrow Ranch Homestead Commons area. There were two occupants in the plane. They both sustained injuries and were flown via two Life Flight Network helicopters to Missoula.