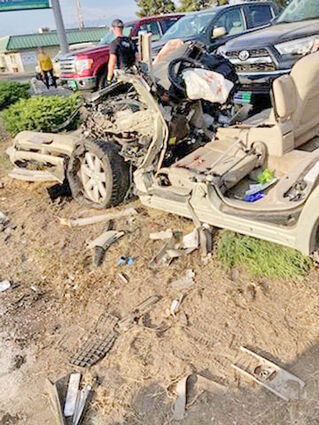 Scott Davis's car after being involved in a head-on collision Aug. 21. It took emergency responders over an hour to extract him from the vehicle.

MISSOULA – Potomac resident Scott Davis had just checked out football equipment with his youngest son Easton when he pulled onto Reserve Street in Missoula Sunday, Aug. 21.

"That's really the last thing I remember until I woke up in Spokane," Scott said. "I don't remember much of Spokane until we got back to [Missoula] which was on Wednesday. It is all a pretty big blur."

The Davises were in a head-on collision just before 6 p.m. near the 3100 block of Reserve.

A representative with the Missoula Police Department said injuries were reported. The injuries of the second party were not rel...