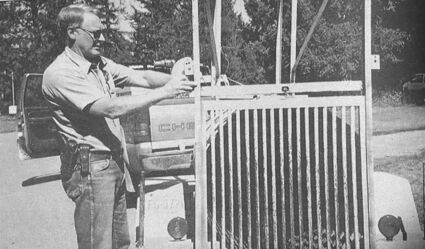 Game Warden Bill Koppen secures the trap containing the notorious black bear, shown right, that has broken into homes and raided freezers and refrigerators. This is the second time this summer that the bear has been trapped here. He will be released farther away from Seeley Lake this time.

In celebration of 36 years of the Seeley Swan Pathfinder, each week we will run parts of articles that appeared in the issue 35 years ago and 20 years ago. The entire issue will be uploaded to our website seeleylake.com for you to enjoy.

Peggy Perna, a South Carolina and Georgia native, wasn't even sure that one-room country schools still existed until she applied for a teaching job at Salmon Prairie school in the Swan Valley earlier this year. But, as a co-teacher for the 16 students here, she is really excited about her first year in a country school.

"It is so refreshing to be in a place where you have so few discipline problems. These kids have the best attitude," Perna said recently. She pointed out that most southeastern schools has anywhere from 30 to 35 students per class and discipline problems are common.

Perna's partner at the rural Swan Valley school is Hazel Jones. She is anything but a stranger to country schools. As a child, she attended a one-room school from first through fifth grade an, for the past two years, she was the only teacher at a one-room school with...

To read the rest of this article more from this issue, visit https://www.seeleylake.com/home/customer_files/article_documents/1987-09-10.pdf 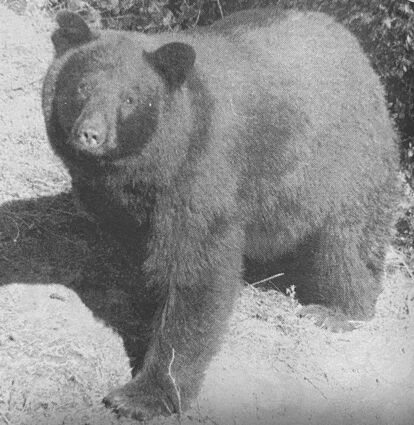 A close-up of Bear Number 0033 in happier times when he avoided the "Wanted" posters by eating only snowmobile seat covers at the Noland home.

The big black bear, tag number 0033, made famous by the Wanted Poster designed by Seeley Lake resident Mary Lynne Jones earlier this summer, was captured a second time on Aug. 25 in Seeley Lake on North Canyon Road. The bear's capture came after a four-day marauding spree, that ended when it broke into a freezer on the front porch of an area residence and ate an estimated $350 worth of food including frozen pizza and ice cream. Two nights before it raided a bag of dog food and two nights before that, garbage.

The first time the bear was in trouble, Game Warden Bill Koppen moved it to Elk Creek in the Garnet Mountain Ranger but the bear returned. "That's not uncommon," Koppen said. "Because bears have an incredible homing device in the brain and know the way to good garbage."

"Bears easily range up to 100 miles," he added, explaining that even if he...

To read the rest of this article more from this issue, visit https://www.seeleylake.com/home/customer_files/article_documents/2002-09-12.pdf