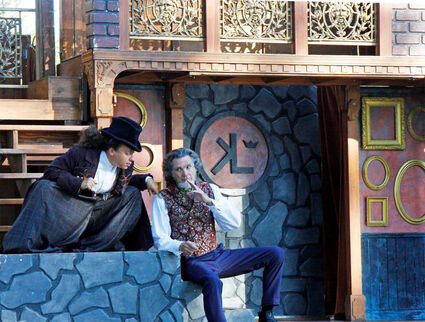 Lear (John Hoskin) and his Fool (Sonia Goldberg) converse on stage. Note the King Lear brand to Lear's left. The Fool has a unique place in Shakespeare's works. He (in this case she) is often the wisest character in the play and the only one who can speak truth to the powerful without fear of retribution.

SEELEY LAKE – This year marked Montana Shakespeare in the Parks (MSIP) golden anniversary-50 years of performing live outdoor productions of Shakespearean and other plays for the people of Montana. On Aug. 15, a large crowd of area residents set up their chairs and spread their blankets on the Double Arrow grounds to watch MSIP unfold the compounded tragedies resulting from King Lear's narcissistic decisions.

As is usually the case when one of Shakespeare's works is performed on the modern stage, directors use other-period costuming to guide the audience to make connections to their mod...