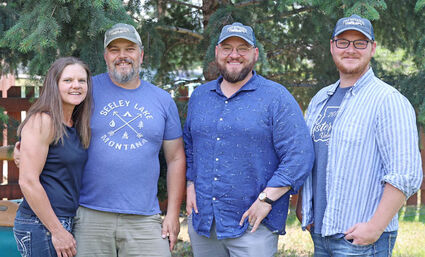 The Mullen brothers grew up in the newspaper industry. They worked as delivery boys for Sioux City Journal and began writing stories for the Newcastle News Letter Journal in high school. The Mullen family is featured in a Smithsonian Museum exhibit profiling families in print media.

Jesse continued the family tradition as a second-generation newsperson. He studied journalism at the University of Wyoming and started as a sports reporter at the weekly Saratoga Sun in Wyoming. He continued his career and worked with publications across the United States in various executive, editorial, production and advertising roles.

"I wanted to preserve small town journalism in the Mountain West [and] provide an alternative to conglomerate newspaper corporations which grow based on acquisitions and cutting staff," Jesse wrote in an email.

Lloyd graduated with a degree in International Studies from the University of Wyoming. He became a partner at Mullen Newspaper Company in 2021. Editor & Publisher Magazine recently honored him as someone to watch in the newspaper industry in the annual 25 Under 35 list.

Mullen Newspaper Company cooperates with family newspapers to ensure their legacy continues, particularly when there are no family members interested in retaining the newspaper. They now manage 13 newspapers in Montana, Idaho and Colorado including neighboring newspapers the Silver State Post in Deer Lodge, Philipsburg Mail in Philipsburg and the Bitterroot Star in Stevensville.

Ponderosa Publications is the parent company of the Shelby Promoter, Cut Bank Pioneer Press, Glacier Reporter and Valierian. They strive to employ a local editor that lives within the community.

"Many of these newspapers already operated with limited staff," Jesse wrote. "Now they are able to focus on the priorities that ensure quality journalism and marketing for local businesses. We handle the books and design work in Deer Lodge, freeing time for our editor and salespeople to prioritize the newspapers' core duties."

Nathan and Andi Bourne have owned the Pathfinder since December 2012.

"After nearly 10 years, we recognized that we had taken the Pathfinder as far as we could and were getting burned out," Nathan said. "We felt that it was time to find someone who could bring in fresh energy and ideas."

The Bournes were also keenly aware of rising challenges facing the newspaper industry, including shuttering printing presses, competition with social media and rising costs. They felt combining with a larger news group could help better weather those challenges.

Nathan and Jesse met while serving together on the Montana Newspaper Association Advertising Service Board of Directors. Discussions about purchasing the Pathfinder began last March.

"Selling to Ponderosa Publications allows the paper to retain the community, hyper-local focus our readers have come to expect and love while providing more support to the editor," Andi said.

"Nathan and Andi produce a great newspaper. We'd be crazy not to want to work with them," Jesse wrote. "Logistically it makes sense to coordinate some roles with already overlapping markets in northern Powell County."

Andi will remain as the editor throughout the transition. The Bournes look forward to continuing to remain and be involved in the Seeley Lake community.

"We are excited about this transition and what Ponderosa Publications brings to our community," the Bournes agreed. "If the community supports the new owners, editor and advertising staff as well as they have treated us, the Pathfinder will continue to give a voice to the valleys."

In addition to their weekly publications, Mullen Newspaper Company offers branded marketing items in addition to in-newspaper marketing. They have bookstores in Deer Lodge and Philipsburg.

When they are not working Jesse enjoys spending time with his family, snowboarding, horseback riding, hiking and reading. Lloyd is an avid photographer and traveler and found a home away from home in Iceland, where he and his wife travel frequently. He lives in Port Townsend, Washington with his wife and their two Irish Terriers, Ronan and Nula. Lloyd enjoys spending his winter weekends in the Cascades and skiing.

Andi and Nathan brought the Pathfinder to astonishing heights with an exceptional level of ethics and devotion. Who among us would have been able to make such a commitment with their sincerity and grace for a few months much less a decade? It is heart-breaking to see the end of their tenure, but amazingly still in their style and to their credit that they found new owners who respect the needs of a rural community as well as strong journalism. Farewell and welcome.