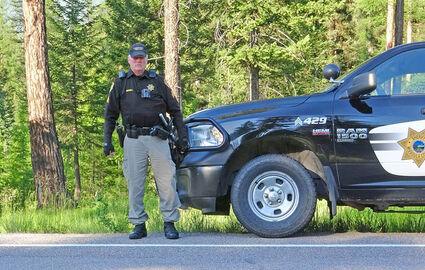 Missoula County Sherrif's Office Sergeant Robert "Bob" Parcell stands on Highway 83 at the location he was shot June 27, 1992. When he realized he was being shot at, he headed towards the tree furthest left in the photo. "That was the tree I was headed for when everything went down. It was to my left and I could at least see it out of the corner of my eye."

SWAN VALLEY – "Don't have too much fun," Danni Parcell told her husband Missoula County Sheriff's Deputy Robert "Bob" Parcell as he headed out the door to respond to an assault call in Lake County June 27, 1992.

At 11:17 p.m. Bob was shot in the chest with a 41-magnum from 20 feet away after pulling over an alleged witness to the assault. Thirty years later he returned with Danni and their son Rincon to the exact spot where he remembers everything happened.

"I went back and kind of hugged my tree," Bob said.

"I never thought Bob would have gotten shot. It's not like we live in a big city...