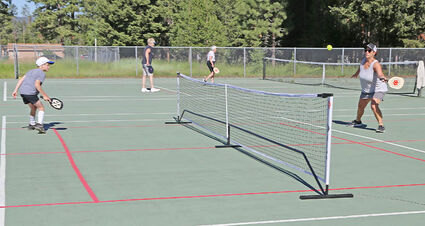 Shelley Alsup reaches to return a volley as Eli Nicholas sets up for the return. The public is welcome to come and play Tuesdays and Thursdays from 9 - 11 a.m. at the courts near Seeley Lake Elementary School.

SEELEY LAKE – Players from eight to 80 years old join together for Pickleball on the Seeley Lake Elementary School tennis courts twice a week. Carole Rice, Seeley Lake resident, has been playing Pickleball for six years and wanted to introduce the sport to Seeley Lake.

Pickleball is a sport which combines elements of tennis, badminton, and ping-pong. It can be played indoors or outdoors on a badminton-sized court with a paddle and wiffle-type ball. Pickeball can be played as doubles or singles and enjoyed by all ages and skills levels.

"I played two years in a row in Arizona and it's been something I wanted to do here," Rice said. "I decided I'd try and get a Pickleball group going this year.

Rice coached high school tennis in Washington for more than 20 years and taught summer tennis lessons in Seeley Lake through the YMCA.

Open play happens on Tuesday and Thursday from 9 a.m. to 11 a.m., Rice said. Anyone can join from beginners to experienced players. There is no cost. There are three courts so up to 12 can play at one time. Rice said some players bring their own paddle, but she has plenty to share for beginners.

Only a couple of weeks into play Rice has seen from nine to 14 players on different days. "I think as soon as the word gets out it will grow," Rice said.

"We just take turns," Rice said. "When you win a game then the winners split up and get a new partner. You're constantly getting a new partner." 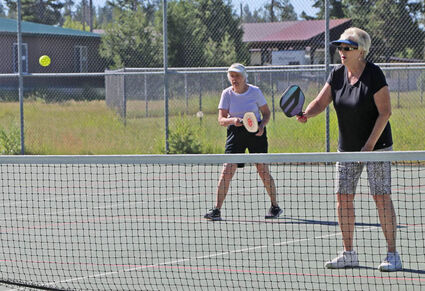 "I'm really enjoying pickleball and it's such a fun bunch of people we have out there," Rice continued. "It's mixing different groups."

According to information on the USA Pickleball website, Pickleball was invented in 1965 on Bainbridge Island, Washington. Three dads – Joel Pritchard, Bill Bell and Barney McCallum - whose kids were bored with their usual summertime activities - are credited for creating the game. Pickleball has evolved from original handmade equipment and simple rules into a popular sport throughout the US and Canada. The game is growing internationally as well, with many European and Asian countries adding courts.

The plan is to play as long as weather holds out. This could go into the fall, Rice said.