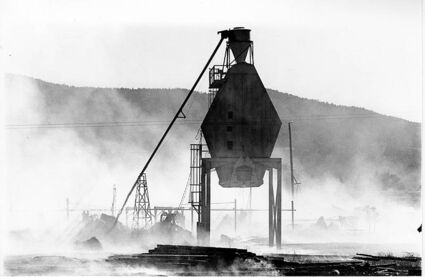 Most of the buildings and equipment at the Greenough Lumber Mill - a familiar landmark near the Roundup Bar in the Blackfoot Valley - burned to the ground last Wednesday. This was the only equipment left standing after the main blaze died down. The thick smoke sent grey pillars of clouds into the sky above Greenough and slowed Highway 200 traffic to a crawl for several hours Wednesday afternoon and evening.

A fire that apparently started in old sawdust piles at Greenough Lumber in the Blackfoot Valley was fanned by 30 mile per hour winds last Wednesday and, ultimately, destroyed most of the mill and burned more that 300 acres of adjoining ranchland and timber. Company spokesperson Mark Byington said on Tuesday that the damage to the mill, so far, is undetermined. "We still need to sort through.... And see what can be salvaged and what can't."

The Greenough mill has been shut down for about a year, although members of the corporation were looking at plans to reopen the mill this year.

Dorothy Pulliam, owner of the Roundup Bar, first spotted the smoke at the mill across the road from the bar about mid-afternoon last Wednesday. "It was just a little puff of smoke when I dialed 9-1-1," she said. But by the time she finished talking to the emergency dispatch operator, and looked out the window of the bar again, two buildings had caught on fire and wind was whipping the flames across Highway 200.

"I was pretty nervous," she admitted. "If the wind had been blowing the other way, I'd a been a goner."

Nobody was injured during the fire, but several houses and buildings, including the Roundup Bar, are only a few hundred yards from the sawdust piles where the fire first started. Firefighters worked to keep flames away from those structures.

Ralph Starr of Missoula Rural Fire Department responded first to Pulliam's call. "At first, I thought it was just a building on fire," he said. But, when he arrived on the scene to find several acres in flames, including machinery and mill structures, he immediately requested two more engines and a second water tender.

Firefighters had also been informed of the presence of a fuel tank that contained about 125 gallons of fuel. The tank blew up around 4 p.m., exploding about 30 feet into the air in a "big ball of flames" according to one firefighter. Nobody was injured in the explosion.

State firefighters from both Missoula and the Clearwater Unit at Sperry Grade also responded to the wildland fire that burned about 355 acres of land east of Highway 200. "The actions we took probably saved several people's homes," according to Paul May, fire management officer from Missoula. Homes along the Blackfoot River were in the path of the fire. Ground crews, aided by a helicopter which dropped water on the fire's leading edge, stopped the flames before any of those structures were damaged....

To read the rest of this article and more articles from this issue visit https://www.seeleylake.com/home/customer_files/article_documents/1987-07-23.pdf

Montanans like mountains and animals, not only in the great outdoors but, also, in art. Artists should tune into that market if they want to sell paintings here, according to Joan Kennedy Laufer, who recently won the People's Choice award at the Seeley Lake Arts and Crafts Show. Joan has strived to paint more animals and mountains scenes since she moved to the Swan Valley from Calgary, Alberta, two years ago she was surprized that visitors at the Seeley Lake show voted for her paintings. "I did feel there were other (artists) there who were more deserving," she said. Kennedy especially admired the watercolor paintings displayed by Ed Domer.

The oil painting that won Joan the People's Choice award was a Montana Landscape titled "wilderness." But, a quick tour thought here studio makes it pretty clear that she is talented in a variety of media. Her favorite art subjects are people. When she lived in Ontario her pastel and charcoal portraits sold exceptionally well...

To read more of this article and other articles from this issue visit https://www.seeleylake.com/home/customer_files/article_documents/1987-07-23.pdf

Grizzly gets the jump on bear-proof fence

But bear demolishes fence before the electric juice could be turned on.

At a meeting hear earlier this year, folks were told about the satellite tracking of a grizzly bear in Seeley Lake. Hourly movements plotted on a map showed the bear was a regular visitor in areas around the south end of the lake near the home of Mike and Patty Dunlap who live a couple miles from the Seeley Lake Campground area. 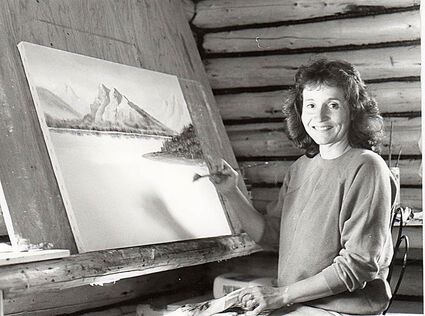 Joan Kennedy works on a new oil painting in her Swan Valley studio. Kennedy won the People's Choice award at the recent Seeley Lake Arts and Crafts Show and Sale for her oil painting of a Montana landscape titled "Wilderness."

The Dunlaps were kind of concerned and Jamie Jonkel, Montana Fish, Wildlife and Parks grizzly bear expert, spearheaded an effort to raise funds for a grizzly-proof fence to protect some sheep and pigs the Dunlaps and their kids kept in small, wooden pens not far from their house.

In June, Jonkel and his crew of fence builders arrived at the Dunlap home, and constructed the fence. It didn't look strong enough to thwart a grizzly bear, but then one taste of the electricity flowing though it was supposed to make it bear proof.

But, before the fence was electrified, the grizzly crawled over one side of it, flattening fiberglass poles and the heavy wire fence and then "blew" out the other side, breaking the wire in half, Patty Dunlap said this week....

To read more of this article and other articles from this issue visit https://www.seeleylake.com/home/customer_files/article_documents/2002-07-25.pdf