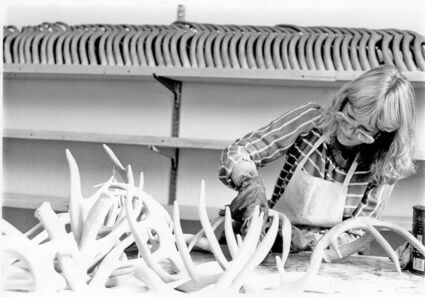 Karla Gehrke has been staining the fiberglass "rattling antlers" being manufactured in Seeley Lake by the Dick Idol Company.

A bizarre series of events occurred in the Swan Valley last week following the death of log trucker Benny Stoltz. Stoltz was a friend of many local residents and had been an independent truck driver for many years. He was hauling logs for John Wheeler at the time of this death on Monday, July 6.

After John Wheeler found out that Stoltz had died, he decided to do a favor for the Stoltz family. He and Max Greenough, area logger, headed north on Highway 83 to take Stoltz's truck to the mill, unload the logs, and deliver the truck to Benny's family in Columbia Falls.

Not too many miles from the Cold Creek Road where Benny had died, a set of bearings went out of the 1970 International logging truck. John and Max pulled the truck over at a wide spot in road and assessed the situation. They disconnected one set of drivers, took the necessary parts and headed to Swan Lake to make repairs.

Meanwhile, a friend of Benny's, who had just heard about his comrade's passing, was traveling Highway 83 and saw Benny's truck parked alongside the road. According to Highway Patrolman Bob McGuire, Paul Longfield decided that he, too, should do a favor for the Stoltz family. He started Benny's truck and headed down the road toward Swan Lake with the truck still fully loaded with logs. He apparently didn't realize that one set of wheels was off the truck. At the first sharp corner, the truck rolled, dumping logs all over the highway. Longfield, meanwhile, panicked and ran from the scene.

Patrolman McGuire said that when he arrived on the scene, "it was like 'The Days of Our Lives' or something. There were people crying about this logger who was dead, and stories about a thief who had stolen the truck. It was a mess."

To read the rest of this article and more articles from this issue visit https://www.seeleylake.com/home/customer_files/article_documents/1987-07-16.pdf

Lord of the Whitetails

It's hard to believe that one of America's leading authorities on whitetail deer has called Seeley Lake home since 1980, but it's true. Dick Idol – well-known writer, editor, hunter and guide – admits that most local residents aren't overly excited about whitetail hunting. Westerners haven't caught on to whitetail fever like people back East, Idol said, even though there are plenty of big bucks in our woods. Idol also isn't surprised that many folks don't realize that his internationally known company and new mail order business is based in Seeley Lake.

Whitetail hunting and antler collecting has been Idol's hobby for 20 years. After college (he graduated from North Carolina State University with a degree in wildlife biology), he guided hunters in Alaska, Africa and much of the United States. About that time, it became apparent that his hunting hobby had turned into his career. In 1981 he became the co-founder of North American Whitetail magazine, which now has a circulation of 150,000 and is the #1 whitetail magazine in the world. The magazine is published in North Carolina, even though a lot of Idol's work is done in Seeley Lake.....

To read more of this article and other articles from this issue visit https://www.seeleylake.com/home/customer_files/article_documents/1987-07-16.pdf 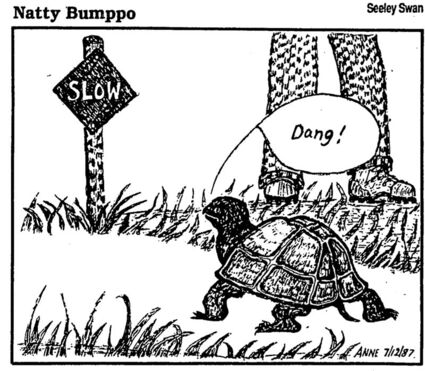 A wanted poster for a bear that broke into our house was published in the July 4 issue of the Pathfinder. I am happy to report that within 5 days of contacting the Game Warden, Bill Koppen, the bear was apprehended. Actually, three bears were trapped in the process. The bear that got in made many trips in and out of the house and left wrappers under a tree close by. This, of course, attracted numerous other bears....

To read more of this article and other articles from this issue visit https://www.seeleylake.com/home/customer_files/article_documents/2002-07-18.pdf