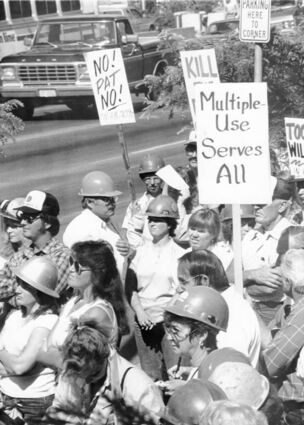 About 40 Seeley Lake and Swan Valley timber industry supporters traveled to Missoula on June 30 for a rally.

Nearly 40 Seeley Lake and Swan Valley residents traveled to Missoula last Tuesday to join other sawmill workers and timber industry supporters in protesting Pat Williams' wilderness bill. Area mill workers, their wives and other supporters spoke out against the release language contained in House Bill 2090 which was heard in the House Interior Committee in Washington, D.C. - also on Tuesday.

"We are not against all wilderness bills. We are against this wilderness bill," Seeley Lake resident Becky Gehrke stated at the rally. Gehrke's husband is employed by Pyramid Mountain Lumber, Seeley Lake. "Due to poor release language in (this bill), the available land will be subject to appeals."

To read more of this article and other articles from this issue visit https://www.seeleylake.com/home/customer_files/article_documents/1987-07-09.pdf

Seeley Lake hosted a record number of visitors last weekend for the Fourth of July holiday. Estimates range from 5,000 to over 6,000 people downtown and camped in other areas around Seeley Lake and throughout the Valley.

"We had one of the largest Fourth of July weekends that we have probably ever had," according to Norm Nash, veteran Highway Patrolman from Seeley Lake. Nash said he had plenty of extra help this weekend - for the first time ever during a July Fourth holiday. His counterparts weren't so lucky, though. "The Forest Service and Sheriff's Officers really took the brunt of things." 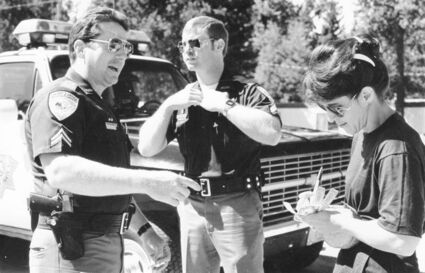 "Ah, c'mon Ellie, Gimme a break." seems to be the words from Deputy Scott McDonald as Ellie Greenough writes out what appears to be a traffic ticket. Actually, Ellie was soliciting funds for the Condon-Swan valley Quick Response Unit raffle and Fourth fundraiser.

Overall, traffic incidents and injuries were good compared to the number of people pouring into the Seeley Lake area last week. Nash estimated that about 300 cars an hour were traveling out of Seeley Lake by Sunday afternoon and estimates that traffic into Seeley Lake on Friday was similar. Out of that, there were only three accidents, only one with serious injuries and three tickets issued to drivers for driving under the influence of alcohol. There were plenty of other citation, though. The Missoula County Sheriff's Department counted 158 tickets written, not including Highway Patrol or Forest Service citations.

"There were a lot of homeless people looking for places to camp," according to Jim Blackburn who works at the Seeley Lake Ranger District. All area campgrounds from Clearwater Junction to Swan Lake were full by late Thursday night. Campers were directed to the old airport area and other "wide spots" for camping.

"I haven't seen crowds like this since the problems of the sixties," explained Ron Ogden.

To read more of this article and other articles from this issue visit https://www.seeleylake.com/home/customer_files/article_documents/1987-07-09.pdf

To read articles and see photos from the July Fourth parades in 2002 visit https://www.seeleylake.com/home/customer_files/article_documents/2002-07-11.pdf