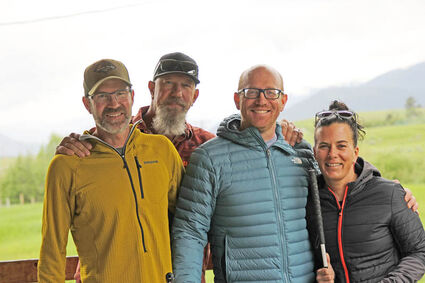 Shawn Cheshire and her team take a day off at the Blackfoot Commercial Company and Ovando Inn in Ovando. Pictured (L-R): Scott Drum, Michael Lahaye, Jessie Crandall and Shawn Cheshire.

OVANDO - After cycling around 550 miles in eight days for the Tour Divide, Shawn Cheshire and her team took a much-needed rest.

While torrents of rain fell outside, they sat on the leather couches and chairs in the lobby of the Blackfoot Commercial Company and Ovando Inn. Cheshire sat on the floor with her back to the wall and her probing cane by her side. She said she was craving a nap.

"I didn't expect the weather to be as extreme as it has been," Cheshire said. "I just remember when I could see, putting my head down and just going because I could see the ground in front of me. We don't get to [now], so it's so much more mentally exhausting."

Upon leaving the Army after eight years of honorable service, Cheshire became an EMT- paramedic. While working as a paramedic in upstate New York, she lost her vision after sustaining a brain injury on the job. Cheshire has done everything from racing with the US National Paralympic Team to setting the record for hiking the Grand Canyon rim to rim. She decided she wanted to do the Tour Divide after finishing the TransAmerica Bicycle Trail last year.

The Tour Divide is regarded as one of the longest and most difficult mountain bike races in the world. Stretching from Banff, Canada to the Mexican border, the 2,700-mile ride is an extreme test of endurance, self-reliance and mental toughness.

For Cheshire the race is so much more.

"If I do this, if I finish it, I hope that I demonstrate to everyone that you literally can do anything you put your mind to," Cheshire said. "It may be difficult but there is always got to be a way for you to do what you want to do."

With cold temperatures and record levels of precipitation forcing some racers to be rescued, Cheshire has faced some of the worst conditions in the history of the Tour Divide. According to the CTV News, as of June 16, at least ten bikers were rescued in Fernie, Canada due to weather.

"This is the hardest thing I've done so far," Cheshire said.

After losing her sight in 2009, Cheshire suffered from depression and refused to leave her house for months. Then she found cycling.

She began tandem cycling in 2012 when she was recognized as an emerging competitive athlete at the United States Association of Blind Athletes (USABA) training camp. She first competed internationally in 2013 at the UCI Track Cycling Championship. In 2016, she was chosen to represent Team USA in the Women's Tandem Time Trial and Women's Road Race in Rio.

She's competed in both road and track cycling but she said this is her first time participating in a long mountain biking race. Most of her pre-training for the Tour Divide involved biking on a stationary bike in her living room. She has a cycling and a power meter, where she monitors her heart rate and her coach can give her feedback.

"With all the other stuff that I'm processing when I'm out there, the last thing I want to worry about is my fitness," Cheshire said.

As Cheshire attested, the logistics of navigating rugged and snowy terrain makes biking without sight all the more difficult. With the help of her two guides Scott Drum and Jessie Crandall she said they've managed, but the mental and physical strain can be exhausting.

In a few cases, they had to re-route to the highways because passes were either closed or too dangerous to bike. Drum said the conditions in Montana remind him of the Genesis flood narrative.

"It's just kind of like the Tour Divide, Biblical edition," Drum said.

Cheshire's team operates in a way Drum described as an arrow. At the front is the "point person" or the person who provides a line of sight for Cheshire. The point person carries a Bluetooth JBL speaker to provide Cheshire with a noise follow. At the back is the fletch or the person who helps guide the team.

Cheshire bikes in the middle of the two, slightly to the right of the "point person" to avoid crashing in case of an abrupt stop. Cheshire and her team wear Sena helmets, which have two radios so they can communicate with each other.

Drum said sometimes Cheshire is often biking a foot away from the edge of the trail. Both Drum and Crandall alternate between being in front and behind. If it's safe terrain, Crandall said the back guide can take breaks to take pictures while the "point person" and Cheshire bike ahead.

"Sometimes we feel a little sheepish saying this because yeah, we have to be focused to keep Shawn safe but she doesn't get any time off," Crandall said. "She doesn't get to rotate, which makes what she's doing all the more incredible."

To help guide her, Cheshire also listens to music from the JBL speaker from the guide in front of her when she bikes. When the terrain changes, so does the music. If she's going downhill, she said she likes to listen to dance music or EDM. If it's flat, it's more mellow and if they're biking up a steep hill, they turn everything off.

"I don't use straight lines, straight lines don't exist in my world," Cheshire said. "It's more of constant moving. If you think of vibrations, you think of feeling, like nothing is straight, hard or rigid. So like on a single track, I like to be farther away from the bike in the back. Now I'm right behind the person, because you can't ride out on the side. I just follow the sound. So in my mind, I'm listening to the music, I'm following the sound pattern that that music makes and that's how I find my way. So it's not so much a line of sight, it's more like a line of hearing."

Cheshire said it's also important to have support on and off the course, both to recharge their helmets and their own physical and mental batteries. When the team arrived in Montana, they received additional support from Michael Lahaye, who met them at their planned campsites and/or hotels with basic necessities and comforts.

"In reading other people's accounts in the Tour Divide, oftentimes a lot of people have the physical tools to do it," Drum said. "But when you're doing these long things, it's the mental toughness that sets people apart or the ability to suffer is the right word exactly, with the ability to just stick to it, and what we're doing, and what and in particular, what Shawn is doing."

Cheshire said they've allocated days in their route as rest days. On average, they're biking around 50 to 65 miles a day, but they hope to up their mileage as the race progresses. She said that her tentative finish date of the Tour Divide is before July 20. 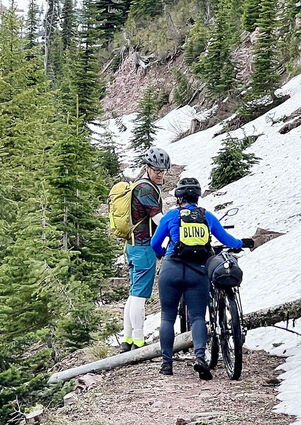 Shawn Cheshire and Jesse Crandall making their way up a snowy pass.

Even after she crosses the finish line, the race for Cheshire never ends. In addition to cycling, Cheshire snowboards, cross country and alpine skis, rock climbs, paddle boards, hikes and runs. She plans to climb Mount Everest next April.

If she does, she'll be the first blind woman to summit Mount Everest.

"I decided to live a life that I could be proud of," Cheshire said. "Part of that is figuring out how to live. So I don't feel limited because I'm blind is what it comes down to. There are a lot of social norms out there that drive me nuts about what society thinks blind people can and can't do. This is my contribution - vision to the blind and visually impaired community, and just humans in general modeling behavior of how to not live a limited life."

To learn more about Cheshire and her journey visit http://www.shawncheshire.org