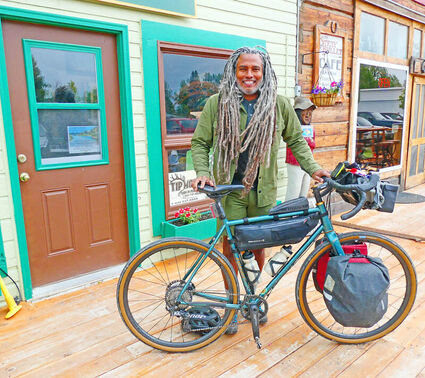 Erick Cedaño, founder of Bicycle Nomad, poses outside the Blackfoot Angler in downtown Ovando. "Curiosity drives me. It fuels my insatiable desire to know what's beyond the next bend of the road, to discover what's there beyond the edges of the map. If it is my muscles that propel me forward physically, it is curiosity that propels me mentally."

OVANDO - Erick Cedaño, the Bicycle Nomad, pedaled into Ovando Tuesday afternoon, June 14. It was the first leg of his 1,900 mile solo trip cycling to St. Louis, Missouri on the path of the 25th Infantry known as the Buffalo Soldiers from 1897. Cedaño left Fort Missoula at 5:40 a.m. just as the original Corps had. A group of Bicycle Corps re-enactors from Fort Missoula accompanied him to downtown Missoula. Commemorative celebrations in Fort Missoula and Wallace, Idaho were held June 13-19 for the 125th anniversary of the 25th Infantry's Bicycle Corps departure from Missoula.

Partnering with Adventure Cycling in Missoula, where Cedaño is a board member, a vision for this "Dignity and Truth: The Buffalo Soldiers Bicycle Corps" project began. This is an initial project in the efforts of "Bipoc Nomad Adventures," a joint effort of Cedaño and Hall, to elevate the importance of Black Indigenous People of Color (BIPOC) experiences and adventures in our nation's history," said Arlen Hall of Adventure Cycling.

"The bravery, perseverance, courage and resilience of these black soldiers against many odds including weather, equipment, racism, abandonment by our government (Brownville Incident) and other obstacles we can only imagine," continued Hall."The journey is a culmination of Erick and my dreams of riding the route and laying testament to the truth of their experiences and the dignity of their efforts."

Beginning in 1888, the Bicycle Corp took their single speed bikes on two initial trips that went to Lake McDonald, Glacier and Yellowstone. The army wanted to test the efficacy of bike patrols for possible military transport. Additionally the Army was testing new bicycle technologies such as rubber wheels, instead of the standard wooden wheels as wagons and other bicycles used. There were 20 soldiers from the 25th Infantry in the final Bicycle Corps trip to St. Louis.

The 25th Infantry was comprised of African-American men. African American soldier units were stationed in remote Western areas in order to avoid racial tensions in the years after the Civil War. After completing the 41-day bicycle trip to St. Louis, the unit was sent to Texas to aid Roosevelt in the Mexican American War.

Edward Boos, a journalism student at the University of Montana, accompanied the Corps to St. Louis because of his love for bicycles. Following the railroad tracks, riders could receive food packages and any clothing and supplies from the passing trains. In addition, Boos sent articles frequently by the trains to both the east and west so the country was aware of their travels. His writings are the only records of the Buffalo Soldiers' journey.

The Smithsonian magazine states that the term "Buffalo Soldiers" was given by Native Americans during clashes on the Western Frontier because of the soldier's curly hair which resenbled buffalo manes.

In 1906, while stationed in Brownsville, Texas, there was an altercation in the town. The 25th Infantry were blamed but found innocent. In 1908, Roosevelt gave the entire unit a dishonorable discharge, stripping them of any retirement benefits, even as some had served their entire working life. Many stood up for them but Roosevelt was unrelenting because of the "shadow" brought to the military. Finally in 1972 a pardon was distributed which provided some repay to the families and remaining living two soldiers.

Researching the Buffalo Soldiers gave Cedaño an understanding about the lack of awareness about these soldiers as individuals. Their names were difficult to track down and many have unmarked graves. Bringing dignity and respect to the Bicycle Corp soldiers motivated Cedaño in developing the ride.

"That's just one of the reasons why I think it's so important for me to tell this story," said Cedaño. "Because I want kids that look like me to know that there were guys in 1897 doing this and maybe dream of traveling by bike or be explorers. I just want to inspire. I just want to tell [the soldiers'] story because it's not my story. I owe them [the soldiers] the dignity that they deserve."

Erick Cedaño picked up the name "Bicycle Nomad" from friends. They chose it based on his solo adventure life on a bicycle. Cedeño has already completed several cross-country solo bike rides. His first ride was from Vancouver, Canada to Tijuana, Mexico.

"It was fun, but it was hard, there was no purpose," said Cedeño. "I was just getting to the next location."

In 2020 he rode from Mobile, Alabama to Niagara Falls, New York to retrace the trail of the Underground Railroad. Following a historical path brought much more meaning to Cedeño's riding. Recreating the Buffalo soldiers' biggest trip to St. Louis became Cedeño's passion the more he learned about the history of their work.

Cedeño will be traveling alone for most of the ride, stopping every few days for supplies, as the Buffalo Soldiers did. The route is based on the Bicycle Corps route, as best as can be managed with today's private lands, fences and roads. Cedaño said he will be seeking out dirt roads as much as possible, just like the Bicycle Corp used. His ride will end July 16 in St. Louis, where the 25th Infantry Bicycle Corps finished their ride July 16, 1897. 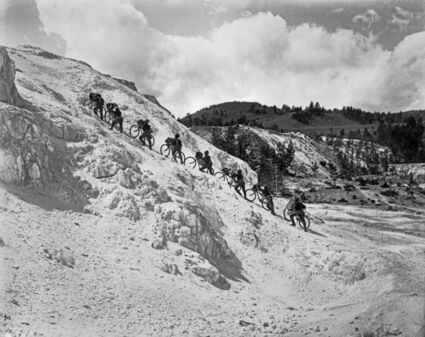 The original Bicycle Corps in Yellowstone.

Hall said, " We are working toward documenting a curated route based on the work of Erick's journey and commemoration, a fall vehicle review of problematic areas, as well as the volume of documented history of the Bicycle Corps by the spring of 2023 so that others can share in the experience."

For more information about Bicycle Nomad or the future route visit https://bipocnomadadventures.com/