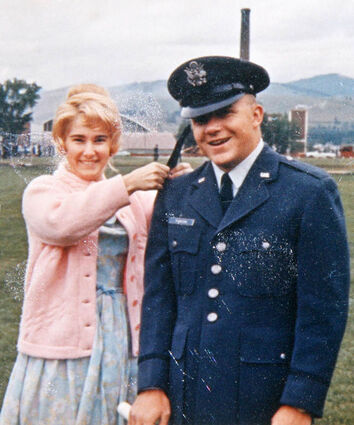 A week after arriving in Italy, Steve Thompson was promoted to Captain. His wife Cheri is pinning his bars on him.

SEELEY LAKE – Steve Thompson was born, raised and educated in Missoula, Montana. He met his wife Cheryl at Camp Paxon in Seeley Lake and, after a stint in the United States Air Force, brought his family back to Seeley Lake to live. But those six years of military service gave the Thompsons an opportunity to visit parts of Europe and Scandinavia and to travel back and forth across the U.S.

Inspired partly by his cousin who was an Air Force pilot, Thompson enlisted in ROTC while at the University of Montana. When he was a senior at UM he was put in charge of the fall Freshman Orientation We...