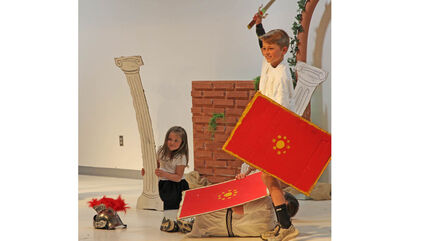 Land Neudecker stands victorious after defeating his opponent (Sawyer Hessler) in the gladiator ring. The performance was a representation of ancient Rome, when Julius Caesar ruled and gladiator rings were a form of entertainment.

OVANDO - From the Stone Age to Rome's era of rule, Ovando School students showcased a journey through ancient civilizations for the annual May Day Tea on May 19. The event was written and performed by 19 Ovando students who danced, acted and played music from seven different civilizations: Mesopotamia, Africa, Egypt, Rome, Greece, India and China.Â

Andrea Tougas, Ovando School's supervising teacher, said the show was based on the students' social studies curriculum and incorporated musical instruments they've learned to play throughout the year. For each civilization, a student's poem was...