Bears are waking up, do your part to reduce conflicts 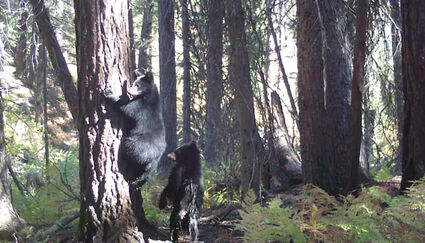 Two black bear cubs out playing in the woods.

The couple heard noises so they looked out their tent. It was the middle of fall 2021 and they were camping behind the old Seeley Lake Motor Lodge. Even though it was dark, they could see there was a large bear outside their tent.

"They managed to get out and get into their car," said Federal Law Enforcement Officer Tyler Robinson who was called to investigate the next morning. "It scared them enough that they spent the night in the car."

When Robinson got there the tent was flattened and their cooler, which was not bear resistant, was damaged. After getting permission to inspect the tent, he found cosmetics, bottles of Gatorade, food and snacks. The cooler outside contained food.

"They should have not been leaving the cooler out in the first place and they should have not had any food or any kind of attractants in the tent," Robinson said. "Those are the things we want to make sure people put up either in a hard sided vehicle or [into a certified bear resistant container]."

With spring here, the bears are waking up. Robinson and Montana Fish, Wildlife & Parks Bear Management Specialist Jamie Jonkel encourages everyone to bear proof their property, follow all food storage orders while recreating and do everything they can to prevent conflicts.

"This is the time of year to be buttoning everything up," Jonkel said. "Seeley Lake takes the golden award for the worst place in Region 2 for unmanaged bear attractants and pure craziness involving bears on a daily basis. The community as a whole needs to sit down and figure out how to fix it. It just makes no sense to have a small city or town the size of Seeley plopped right in the middle of some of the wildest country on earth and not solve the problem which is so simple to cure by not having garbage and bird feeders [out] and food available. It is just too wild there. You can't live like you can in a town like Great Falls or Missoula. You need to do things differently."

"Attractants" is a general term used by wildlife managers to define anything with a smell that will attract a bear. According to the National Park Service, a bear's sense of smell is seven times better than a bloodhound's. This allows black bears to smell food several miles away depending on conditions.

While dead carcasses and rotting material offer the biggest attractant in the wild, domestic animal food, birdseed and unsecured garbage are attractants that draw bears into communities. Robinson said beer, soda, cosmetics, toothpaste, deodorant and even can goods can attract a bear into camp.

"If we can put that stuff in the car at night it is not that hard," Robinson said.

Jonkel said in mid-April there were reports of four or five bears out in the Seeley Lake area.

"Every day we are going to get more and more grizzlies out," Jonkel said.

So far there have been no reported conflicts in Seeley Lake. However, there was a report of a bear that got into a chicken coop in the Swan Valley in mid-April and Jonkel said they were investigating a possible calf depredation in Helmville.

Last spring in Seeley Lake, there were issues with bears getting into a few dumpsters that were either overfilled or did not latch properly. Jonkel said right now most of the bear resistant cans and dumpsters in Seeley Lake are either being overfilled or are not being latched on the top and the bottom. When they are not locked with a carabineer or a Republic Services lock on the lower part of the dumpster, they are no longer bear resistant.

Robinson encourages businesses that are putting attractants into dumpsters or individuals that want to deal with the bear attractants on their property to contact Jonkel in the Seeley Lake area and FWP Bear Management Specialist Erik Wenum in the Swan Valley. They can help come up with solutions to prevent conflicts before they start.

"It just takes once, they get conditioned and they get that reward and they are going to keep coming back," Robinson said. "The chances are when they get a reward they will return. It causes property damage and have sheds get torn apart."

There were also a few incidents where residents were storing their trash outside, in a vehicle, or in a shed that bears got into and spread the trash all over the neighborhood.

"It is one of those things, we have got to make those trips to the dump," Robinson said. "Any bear makes its living off its nose and smelling things. They have amazing memories of where they get rewards. It will return year after year so we've got to put our things away. If we could just outsmart some bears and keep a clean camp, clean yard, clean house, it would resolve a lot of these issues."

In addition to issues with unsecured trash, Robinson said last spring they also had a black bear that opened the door of the parked school bus and got into the trash that was inside. It then opened the door to the basement of Faith Chapel and went over to the refrigerator.

"There were paw marks all over the white refrigerator. Luckily it didn't get it open," Robinson said adding it found its way out through the door, there were no injuries or damage.

Robinson said they are working on ways to mitigate conflict with bears in the Forest Service campgrounds since the dumpsters attract the bears. They are also working on getting food boxes and poles for hanging food in the campgrounds for cyclists that need a place store their food.

Robinson reminded the public that having a salt block on their property is illegal as well as shooting a bear.

Jonkel encourages people to report sightings of bears on missoulabears.org. This helps him keep track of various bears. However, sightings are not an issue unless the bear gets a reward.

"One little mistake is all it takes and the bear is the loser in the whole thing," Robinson said. "When we keep getting repeated issues in the same place Jamie or Eli [Hampson] will bring a trap up and we either have to relocate it or if it is a bear that has been caught, they have different policies. If it is a boar they get two times, a sow gets three times and then they put it down."

Robinson said he will cite people anytime of the year for improper food storage. FWP has documented radio-collared bears out and about every month of the year.

"Grizzly bears are not true hibernators like black bears," Robinson said. "You can see a bear just about any time of year."

While FWP is required to issue warnings prior to citations, Jonkel said they have warned many people over the last 10-15 years. If someone has been warned in the past, they can receive a citation.

"What we are finding is that most people are just ignoring anything we say," Jonkel said. "Perhaps the best way to get someone's attention is through their check book."

• Install electric fencing around all bird coops and livestock.

• Secure garbage in a sturdy enclosure away from windows and doors or invest in a bear resistant garbage container.

• Remove all bird feeders and suet cakes after April 15. Put out hanging flowers and birdbaths instead.

• Place tarps under loaders when transferring grain to prevent spills and properly dispose of old grain.

• For livestock owners, dispose of carcasses and afterbirth through sanitation services or place inside an electrified boneyard or by distributing away from people, buildings and livestock.

• Store all pet food and livestock feed within the house or a sturdy enclosure.

• Turn on radios at night to talk shows in barns, coops and garages to give the idea of human presence.

• Keep refrigerators and freezers in secure buildings, not on the front porch.

• After using a grill, burn off any excess food and grease and empty the grease trap.

• If a bear is on your property scare it away with loud noises and yelling at it since bears typically do not like people. This will help the bear learn that being around homes and people is not safe. Refrain from using firearms to avoid unnecessary injury to the bear.

• Communicate with your neighbors so they are not attracting bears that in turn put you at risk.

• If experiencing conflict(s) please call FWP ASAP. The sooner they know, the sooner they can respond and get ahead of the problem.

For more information on living, working and recreating in Montana's bear country, visit the FWP Bear Aware website at https://fwp.mt.gov/conservation/wildlife-management/bear/be-bear-aware.