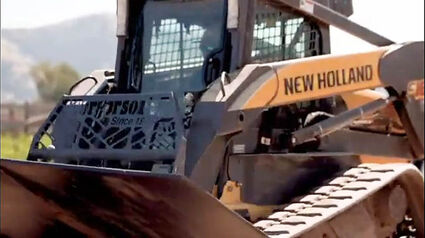 This 2009 New Holland 185 Skid steer was stolen from the Rolling Stone Ranch near Ovando in the early morning hours of April 21.

OVANDO – Thursday morning, April 21, Rolling Stone Ranch contacted the Powell County Sheriff's Office and reported that their tracked 2009 New Holland 185 skid steer was stolen from their property. The piece of equipment was last seen Wednesday night around 7 p.m. at approximately mile marker 44 on Highway 200. The investigation is ongoing.

Brady Stone of Rolling Stone Ranch said he and his father Jim dropped the skid steer off on their property on the north side of Highway 200 on Monday. They were working on moving some brush but did not return Tuesday or Wednesday.