Great reward discovered under "Stone in the Road" 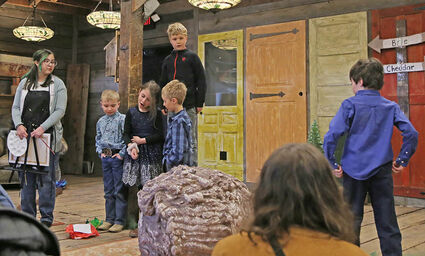 GREENOUGH - Sunset School students performed "Stone in the Road" before an audience April 13 in the Bull Barn at The Resort at Paws Up.

Queen Mariana (Rowan Burckhard) had her confidant Barcarole (Sera Benton) roll a stone into the path going from Brie to Cheddar. Before hiding, the Queen placed a bag of gold under the stone.

The Queen and Barcarole watched as different groups from the village approached the stone. Most complained about the obstacle, some found a way around, while others went over the stone and continued down the road.

It is not until late in the day when the miller's d...