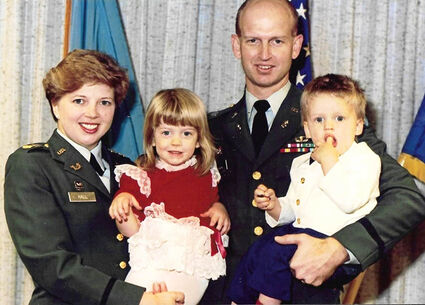 Majors Mike and Robin Hall in 1994 with their first two children Victoria and Matthew.

CYGNET LAKE – Part I of the Veteran Spotlight on Mike and Robin Hall covered each of their commissions in the Army – Mike in the Ordnance Corps and Robin as a JAG lawyer – their marriage in Germany and their subsequent assignments in Germany where their third and fourth children were born. Part I ended with the Halls serving in the D.C. area, Mike involved in war planning at the Pentagon and Robin a Chief of the Judge Advocate General's recruiting office.

After her recruitment assignment, Robin became the Staff Judge Advocate at Fort Belvoir, located about 20 minutes from the Pentagon...