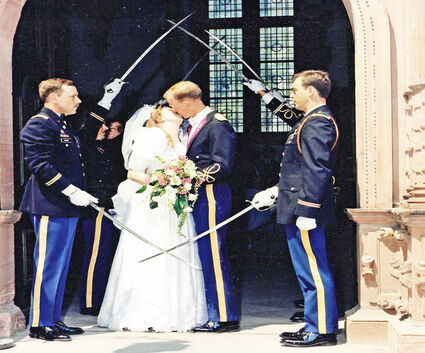 Lt. Mike Hall and bride Robin walking through arched sabers. They were married in the chapel of a castle in Aschaffenburg, Germany.

CYGNET LAKE – Neither Mike Hall nor his wife Robin planned on 20-year military careers when they commissioned into the Army. But that was before they met each other.

Graduating from Belgrade, Montana, Mike applied for an ROTC scholarship. That got him to Montana State University and resulted in a Bachelor of Science degree in Chemical Engineering and a four-year commitment to serve in the United States Army. His plan was to leave at the end of those four years and get a job in industry.

Mike was commissioned in 1981 into the Ordnance Corps completing his Officer Basic Course at Aberdeen P...