Several community members were honored at the Founder's Day pancake supper held Sunday at the Seeley Lake Community Hall. Seated at the head table were (left to right): Tex and Mame Baker, Allen and Mildred Chaffin, Mitzl Haglund, Butch and Herb Townsend. Not pictured: Otto Haglund and Bert Sullivan. Several community groups helped organize the supper. The Aid Association for Lutherans sponsored the event. Money raised will be donated to the Community Hall for necessary improvements. More than 100 people attended and were entertained by musicians and speakers.

This building, our Community Hall, has grown from a need that began as long ago as the 1950's, for a logging boom had descended on Seeley Lake, bringing people into the area in small flocks and bunches. It was our own Bert Sullivan who unwittingly planted the seed. She had gotten a group together for a March of Dimes dance at the "Green Building," one of two that had been built by the CCC's and used by the smoke jumpers at the Ranger Station.

The building had been moved to a site near the present Elden Rammell residence and renovated, ostensibly to be used for community gatherings.

But, the influx of families soon required, a classroom for the area children and the "Green Building" was destined to become a schoolhouse. The little dance was an event in the community and the enjoyment lingered on after the door was locked and the dancers had gone home.

In this area, it was a long time between crabapples and pussywillows and travel conditions were something to be reckoned with. People were so hungry for entertainment that even bachelors were showing up at P.T.A. meetings because of the social hour that followed!

Bert's little dance just would not go away. The participants looked at each other and wondered wistfully if we couldn't have another.

To our surprise, not many of the newer people knew how to square dance. I had told someone about our farmhouse parties at Arlee where we cleared out everything but the piano and danced until the wee hours, making our own entertainment. I must have let slip that Allen had called the square dances. That did it!

"Do you 'spose Allen would teach us?" and "Where could we have another one?"

I "sposed" that he might and got his consent.

"But we don't know enough people," he said. "Tell them to bring their own crowd and they can meet here Saturday night."

"Here" happened to be our living room at the Tamaracks. I was somewhat hesitant since we were still almost strangers in the community. But I moved out the furniture, made a batch of donuts just in case and waited, wondering whether anyone would come.

It happened to be Valentine's Day. They came with salads, sandwiches, decorated cakes and an enthusiasm that would not quit! The festivities ended only when I looked at my mistreated old violin to find that the entire end had come unglued.

But they liked the sample and wanted more. Someone suggested that we form a square dance club. And someone else remembered the little building that sat on the hill beside the Blackfoot Church....

To read more articles from this issue visit https://www.seeleylake.com/home/customer_files/article_documents/1987-04-09.pdf

Vince Chappell, General Manager of the Missoula County/Seeley Lake Water District, was chosen by the Montana Section of the American Water Works Association (MSAWWA) as its Small Water System Operator of the Year. He will receive the award at MSAWWA's annual conference on April 11 in Great Falls. 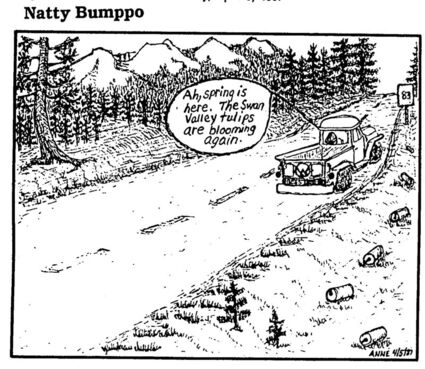 Vince is a graduate of the MSU-Northern Water Quality Technology Program. Following graduation, Vince became an operator at the Chinook Water Treatment Plant. After two years as an operator, Vince took over full operation of the plant until September 2000.

Vince is married and has three children.

The American Water Works Association is the largest professional water organization in the world...

To read the rest of this article and more from the issue visit https://www.seeleylake.com/home/customer_files/article_documents/2002-04-11.pdf