Small but mighty - Potomac Pioneers learn to play as a team 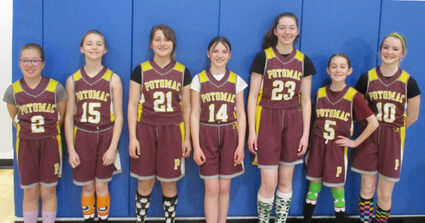 Potomac Girls Basketball Team (L-R): Claire Kelley, Ivy VanGrinsven, Emma Martinez, Elizabeth Cruson, Katrina Olson, Anna Duello and Kaycee Salter. One of the team's trademarks this season was wearing crazy socks. Duello's brother's hockey team had crazy tape on their hockey sticks. When she went out for the Potomac Girls Basketball Team, he suggested they wear crazy socks to the games for good luck. Several of the parents bought crazy socks for the girls to wear. Katrina Olson's mother Sigrid said the girls had a lot of fun with the crazy socks and received compliments from other teams.

POTOMAC – With only seven girls out for the Potomac School Girls Basketball team not only did they see a lot of playing time, Head Coach Beth Copenhaver said there was a lot of improvement. The Pioneers finished sixth in the Copper League Tournament.

"I've been most proud of the effort that they put on the court," Copenhaver said. "At the end of the day, if you go out and put everything out there and you work your hardest, that is what matters, that is what we count as a win – that we put our full effort forth. I think they all understood that by the end of the season."