Blackhawks soar at first track meet of the season 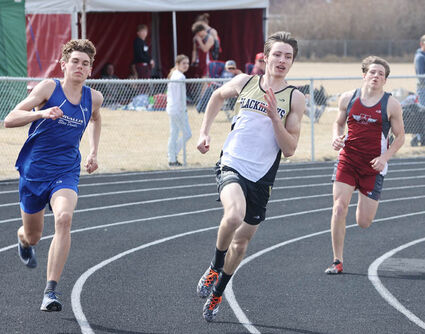 Junior Owen Hoag rounds the first corner of the 400-meter. He took first place with a time of 51.52.

CORVALLIS - Seeley Swan High School's track team competed against athletes from 17 A, B and C class schools at the first meet of the season March 26.

Seeley-Swan's returning state champions Walker McDonald, Owen Hoag and Sariah Maughan all showed they are back to defend their titles.

McDonald took first place in the discus with a throw of 161 feet, just 4 feet shy of his best throw last year. He won by nearly 20 feet over Seeley-Swan's Klayton Kovatch. Kovatch took second place and extended his personal record by more than 8 feet to 142 feet 3 inches.