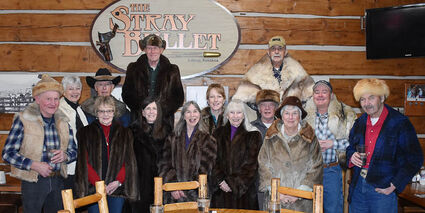 OVANDO – More than a dozen people dressed in fur enjoyed an evening out at The Stray Bullet in Ovando at the end of February. While most would agree it was an unusual sight, that is exactly the reason Trapper Bob Sheppard and his wife Terry started the annual Fur Dinner nearly 10 years ago.

"It is a fun way to promote the benefits of fur and a good reason to enjoy a meal at a local restaurant, during a dark cold evening," Terry wrote in an email.

The Sheppards were the only people at the first Fur Dinner in the mid-2010s. Each year they invite more people and host the event at a different restaurant in the Blackfoot area. This year they had six couples and a few individuals attend the event at The Stray Bullet in Ovando. The only requirement is to wear some type of fur item.

"[We want to] promote fur and encourage people to use the historical fur items in the closet owned by grandparents, parents or discovered in second hand, antique stores or bargain sales," Terry wrote. "Fur is durable, warm and enjoyable. We want to educate the public on those benefits of renewable resources."

Seeley Lake couple Jan and Dave Guelff attended this year for the first time. At a Thanksgiving Dinner in 2019 Jan said she and Terry were talking about furs. When Jan mentioned she had her grandmother's muskrat coat, Terry invited her to attend the annual Fur Dinner, "a supper out with other fur 'bearers.'" Jan was leery. 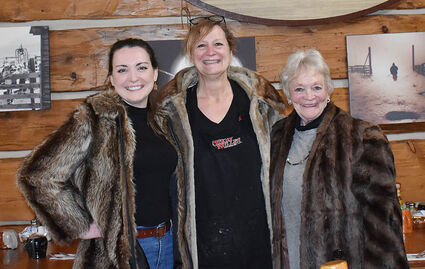 "The first image I had of this proposition was the horror of having a protester spraying Nana's coat, resulting in me being carted off to jail after strangling the sprayer," Jan said. "But Terry went on with enthusiasm about previous dinners and the fun they were with no mention of any uproar and she promised to call me for the next one."

With scheduling conflicts and the 2021 dinner canceled due to the pandemic, the Guelffs finally made it. Jan wore her grandmother's muskrat coat made in 1950. Her grandmother worked in Spokane, Washington boarding muskrat hides. Her employer let her choose her favorites to make the coat.

"I hadn't realized the variety of furs until I saw our fellow diners – an awesome group of folks with all sorts of wearable furs," Jan said. "What fun!"

"It is fun to socialize with other people in the community that enjoy similar events. Plus, we try to support and provide advertising for the local restaurants," Terry wrote. "Many positive comments are made by other people eating or working at those restaurants."