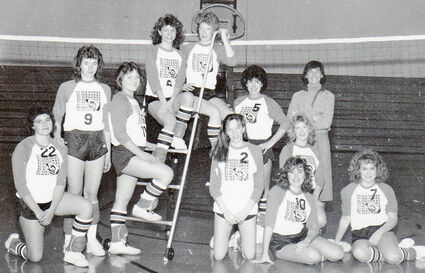 Bring back the bluebirds

Have you ever wondered about the birdhouses along Highway 83 on the Blackfoot-Clearwater Game Range at Clearwater? The boxes are part of the Montana Bluebird Association's Bluebird Trails and are becoming part of a statewide centennial effort to bring larger numbers of Bluebirds back to Montana.

Originally set in place by Harold Knap and forestry students from Missoula County High School, the upkeep of these boxes is now being undertaken by students from Seeley Swan High School. The local trail forms a loop around the game range starting at Kozy Korner, proceeding east to Upsata Lake, then south to Highway 200, back to Clearwater and north. This loop contains over 100 boxes, of which 20 percent are normally occupied each summer by pairs of Mountain Bluebirds.

This week marks the beginning of a project to place Bluebird nesting boxes across the state along Highway 200 in an effort to "bring back the Bluebirds." The project is set for completion by the centennial year. Seeley-Swan High School students will be joining other groups in this effort over the next few weeks. Harold Knapp and his students will be placing boxes from Missoula to Rainbow Bend on the Blackfoot. Members of the Potomac 4-H Club are continuing up to Clearwater. Students from Seeley Swan will be placing boxes from Clearwater through Ovando, to link up with boxes extending to Rodgers Pass being put in place by Lincoln High School students.

Data collected over the past few years show that Bluebird numbers are on the rise in western areas of Montana. Construction plans and a limited number of boxes are available if you wish to assist these birds by constructing or placing boxes in your area.

To read more articles from this issue visit https://www.seeleylake.com/home/customer_files/article_documents/1987-03-19.pdf

Upsata Lake may be closed to fishing

Upsata Lake, north of Ovando near the Woodworth area, may be closed to fishing for at least two years in order to improve the trout fishery there and control the exploding population of small perch, according to Fish, Wildlife and Parks officials.

At a meeting held in Seeley Lake two weeks ago to discuss the Blackfoot River fishery, Dennis Workman, fisheries biologist for the Department of Fish, Wildlife and Parks, Region Two, Missoula, indicated that the Department will be introducing McConaughy trout (hatchery strain of rainbow) into Upsata Lake later this year.

"The population of perch there is getting out of hand," Workman said. "Hopefully, these [McConaughy trout] will help control that population." 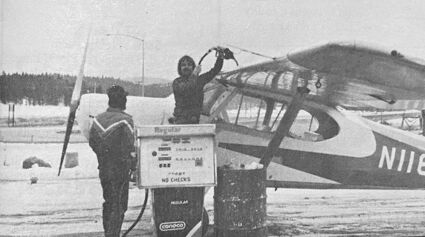 Rick Stone, Clearwater, is shown here filling an airplane with gas at Stoney's near Clearwater Junction. The aircraft made an emergency landing because of a faulty fuel cap on Feb. 26. Rick recalls about six planes that have landed on either Highway 200 or 83 in the past 12 years. Three of them made emergency stops because they needed fuel; and three of them landed because of bad weather.

The proposal which workman discussed will be subject to Fish and Game Commission approval on April 3.

To read the rest of this article and more from this issue visit https://www.seeleylake.com/home/customer_files/article_documents/1987-03-19.pdf

Seeley Lake musher, Jim Gallea, finished the Iditarod happy with his 30th place position out of 64 mushers. He had hoped to finish in the top 20, but the course was fast this year with good weather and everyone running well.

Gallea ran the 1,100 miles in 10 days, 20 hours, 38 minutes and 19 seconds. He is now the fastest Gallea to finish the Iditarod, beating his mother and father's previous time by 48 hours.

Gallea arrived at the finish line on Thursday, March 14 at 6:38 in the morning. He completed the course strong with 12 dogs. Willow and Otis were in the lead. When the team pulled into Nome...

To read the rest of this article and more from the issue visit https://www.seeleylake.com/home/customer_files/article_documents/2002-03-21.pdf